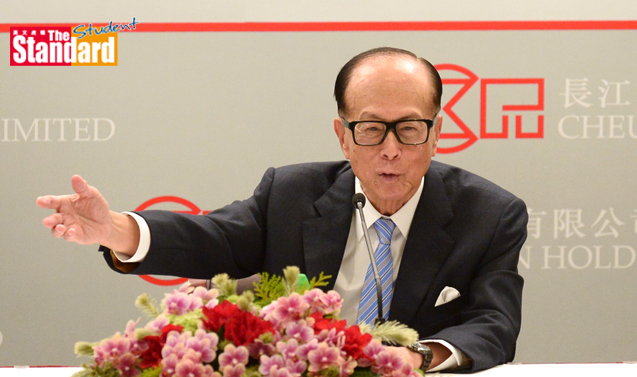 HONG Kong’s richest man Li Ka-shing (李嘉誠) has urged politicians to think about the reasons for the Mong Kok riot and to do no more harm to the city.

When asked about the performance of the chief executive, Li said Leung Chun-ying (梁振英) has tried hard.

But he made no comment on whether he would support Leung in a run for another term next year as “no one has publicly announced the intention to run for office yet”.

Politicians should think about what happened in Mong Kok (旺角) during the Lunar New Year, Li said, and learn a lesson.

He also called on citizens to think of the interests of society as a whole, despite different political beliefs, and “do no more to harm the city”.

He added: “Hong Kong is losing out without us noticing.”

Amid the rise of localism against the election backdrop, he regards the independence of Hong Kong as unrealistic.

He remains a firm believer in the city’s reliance on China, saying: “If the mainland government indicates that it will no longer support us, the Hang Seng Index (恆生指數) would fall by more than half.”

When asked about where ‘one country, two systems’ will go after the 50 years set in the Basic Law (基本法), Li responded by saying that even “one country, one system” is possible.

“But if Hong Kong is doing well by then, why should there be a change in system?”

Rags to riches: How Li-Ka Shing went from factory worker to the richest person in Asia
http://goo.gl/7HZHfy