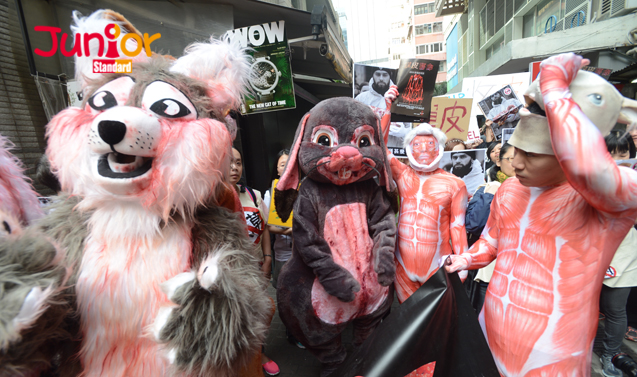 There was another protest in Central – this time it was not about politics but fur.

About 100 people marched to the Hong Kong Convention and Exhibition Centre (香港會議 展覽中心) to protest against the International Fur and Fashion Festival on its last day. Protesters also lined a footbridge to distribute leaflets urging a fur boycott.

The protest was staged by a group called No Fur Citizens Hong Kong (厭棄皮草公民). Its spokesman David Wong Kai-yan (黃繼仁) said fur companies taking part in the annual festival said they are concerned about animal welfare.

But people should just stop buying and wearing fur, he said.

Wong also said there was double the number of protesters compared with 2015.

He hoped too that authorities would ban the trade in fur.

Another protester, Lai, said she became a vegetarian after learning how animals are bred or killed for their fur.

A spokesman for the Hong Kong Fur Federation(香港毛皮業協會) said farms that produce fur are governed by regulations.

He added that the protesters “serve to deliberately mislead” people and try “to harm the fur industry by spreading the wrong messages”.

Animal are not ours
www.peta.org/issues/animals-used-for-clothing/fur/

Phone use at sc...
HONG Kong schools have come up...