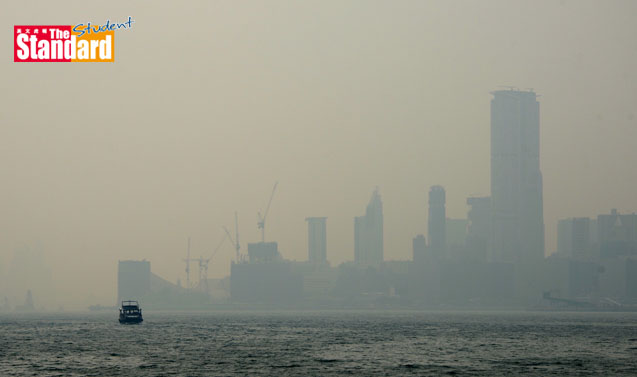 In its latest preliminary comparison, the Environmental Protection Department (EDP, 環境保護署) revealed that six out of seven indicators showed falls, though the amount of ozone increased by 7 percent from 43 micrograms per cubic metre to 46ug/m3.

“Actually, ozone will not be emitted directly,” he said. “We usually call it a secondary pollutant. It will appear after nitrogen oxides and volatile organic compounds appear under light.”

In the latest schedule, by 2020 the department aimed to reduce emissions of sulphur dioxide, nitrogen oxides, respirable suspended particulates and volatile organic compounds by between 15 percent and 75 percent compared with 2010.

It will step up collaboration with provinces, especially Guangdong (廣東), to tackle pollution in the Pearl River Delta. “The mainland has already implemented several measures involving pollutants from vehicles, power plants and factories,” he said.

Mok said the other indicators dropped because of the effectiveness of measures such as tightening statutory standards for the emission of newly registered vehicles, switching motor vehicle fuel from Euro II to EuroV, and encouraging people to change to new environment-friendly cars.

A scheme was introduced last year to phase out 82,000 pre-Euro IV diesel commercial vehicles by the end of 2019.

The government has also tightened the sulphur content of light diesel, and will enact a new regulation this year mandating that ocean-going vessels switch to cleaner fuel while at berth.

He expects that by committing to its control measures, Hong Kong will broadly meet its air quality objectives by 2020.