Call for mask ban at protests 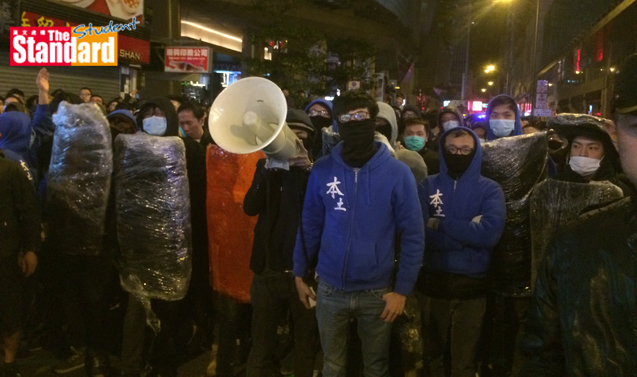 PROTESTERS should be banned from wearing masks, establishment-backing legislators argued as society tries to draw lessons from the Mong Kok (旺角) riot.

Some of the most striking sights on a bad night for Hong Kong were of masked rioters in battles with police during the Lunar New Year.

That led to a call for a no-mask law at a special Legislative Council (立法會) security panel meeting on Tuesday, though concerns that such a ban could infringe human rights soon surfaced.

One lawyer said some people wear a mask when they are ill, for instance, with a cold.

Secretary for Security (保安局局長) Lai Tung- kwok (黎棟國) said during the meeting that around 700 rioters were involved at the height of the Mong Kok trouble, with bricks raining on police.

Such descriptions fired up legislators Elizabeth Quat Pui-fan (葛珮帆) and Ann Chiang Lai-wan (蔣麗芸) of the Democratic Alliance for the Betterment and Progress of Hong Kong (民主建港協進聯盟) to say the SAR should follow countries that have no-mask laws so people involved in protests can be identified.

Lai remarked that when people wear masks at demonstrations “I think they have a premeditated plan for breaking the law and escaping responsibility”.

Phone use at sc...
HONG Kong schools have come up...