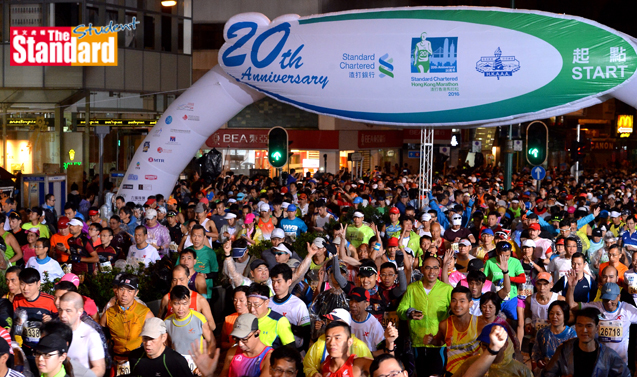 MORE than 61,000 runners defied the weather and slippery roads on 17 January with only 11 needing medical attention as African athletes took the 20th Standard Chartered Hong Kong Marathon (渣打香港馬拉松) by storm.

The popular race was extended to Mong Kok (旺角) for the first time. But there were fewer supporters to cheer the runners, who dashed from Tsim Sha Tsui (尖沙咀) to Mong Kok via Nathan Road (彌敦道) before taking Argyle (亞皆老街) and Cherry (櫻桃街) streets, then Lin Cheung Road (連翔道).

There was only one serious injury – a man in his 40s who passed out and was taken unconscious to Ruttonjee Hospital (律敦治醫院). Six other men and four women suffered mainly from cramps and twisted ankles.

About 74,000 runners signed up for the full marathon, half-marathon, 10-kilometre and 10km races as well as the 3km wheelchair race and youth dash. But organising committee chairman William Ko Wai-lam (高威林) said the rain had discouraged some from hitting the road.

“An 83 percent participation rate is higher than we expected, given the weather,” he said.

Ko said the weather actually favoured the runners in general as the temperature was comfortable.

“The first five past the post in the marathon did even better than the champion last year,” Ko said.