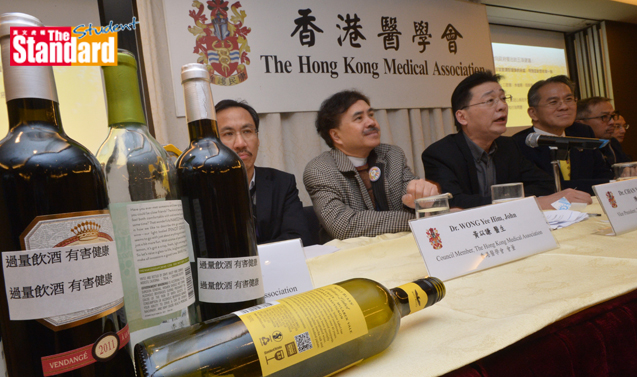 THE Hong Kong Medical Association (香港醫學會) has called for warning labels on alcoholic drinks to lower deaths from alcohol-related diseases and accidents.

“The practice of health warning labels is widely adopted in Western countries and even the mainland,” association president Louis Shih Tai-cho (史泰祖 ) said. “The government and alcohol retailers should also take this as a responsible first step to ultimately lower the number of patients and deaths caused by drinking alcohol.”

Shih said the standard drinking measure guideline printed in Chinese should at least be included on a label together with warning slogans like those that are now compulsory on cigarette packets.

In Hong Kong, cigarette packets are required to have a health warning in both Chinese and English.

A safety standard for daily intake of red wine with 12 percent alcohol content would be “100 millilitres for women, 200ml for men,” Shih said.

The association also said a tax should be imposed on red wine and beer, which are currently exempted from duties.

“Young people are the most sensitive on price changes. Imposing tax on these drinks could change the addictive or regular alcohol consumption pattern,” said Shih, who dismissed claims that drinking can be good for health.

“No medical association would ever encourage people to drink,” he said.

Shih added he was one of the victims of the mistaken belief, after proposing “wine dinner” activities for association doctors around a decade ago, but stopped them two years ago.

Drinking alcohol is now regarded by the World Health Organisation (世界衛生組織) to be a direct cause of six kinds of cancer.