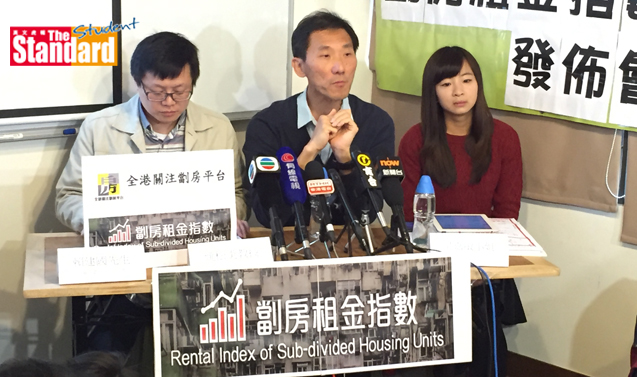 RENTS and electricity costs for subdivided flats have risen at twice the rate of other small flats over the past four years, according to researchers.

They formulated an index to illustrate the rental and electricity costs paid by residents of subdivided flats based on the Rating and Valuation Department’s (差餉物業估價署) rental index, which uses the 1999 rental level as the base value.

From the beginning of 2012 to last October, the index rose from 349.4 to 543.4, an increase of 56 percent. The index for small flats with a saleable area of 39.9 square metres (429 square feet) or below, classified by the department as Class A units, only increased by 21 percent. “The figures show that over the past four years, the rent of partitioned flats has gone up 2.6 times that of Class A units. The rental increase burden on tenants in such units is much bigger than those who live in normal, small flats. The situation is worrying,” said Edward Yiu Chung-yim (姚松炎), associate director of the institute.

In October last year, the index for subdivided flats was 370.1. It was more than double the 177.4 for Class A units.

Platform convener Lai Kin-kwok (賴建國) called on the government to provide transitional accommodation for residents of partitioned flats including making use of abandoned schools and unneeded civil servant dormitories.