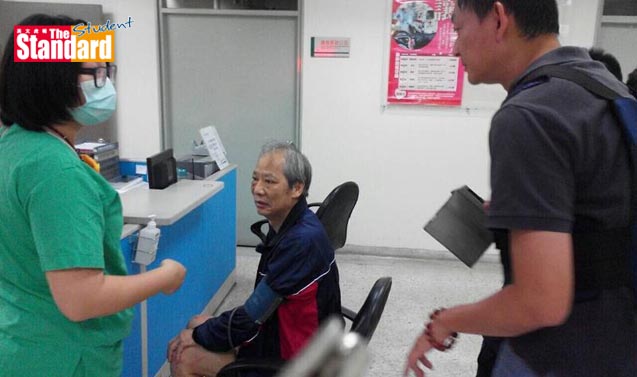 AFTER rescuing Pearl Oriental Oil (東方明珠石油) chairman Wong Kwan (黃坤) and arresting 15 kidnap suspects in a two-day operation that ended last Tuesday, officers on both sides of the Taiwan Strait (台灣海峽) are working to find the mastermind, believed to be a Hongkonger with a financial background.

Cai Wen-li (蔡文力), of the notorious United Bamboo Gang (竹聯幫), and the man who allegedly coordinated action in Taiwan (台灣), and Cai Guang-zhong (才廣忠), who travelled between Taiwan and Hong Kong, used WeChat to communicate with the Hong Kong suspect.

Cai received NT$5,000 (HK$1,187) for each trip to Hong Kong, and someone paid for his air tickets and accommodation, convincing Taiwan police that he had assistance here.

Hong Kong police are investigating Cai’s bank transactions and searching for those connected to him.

He was monitored by police when he arrived in Hong Kong last Monday but they did not see him get in touch with others or retrieve the ransom money.

He was arrested at Taoyuan International Airport (桃園國際機場) upon his return to Taiwan on the same day.

Meanwhile, two suspects who allegedly guarded Wong, 68, during his 38-day captivity reportedly told police that they received orders to scare but not kill the billionaire. The guards, who were wanted criminals, claimed they only hit Wong once because he denied owing money in Hong Kong.

However, Wong said he was hit more than once, and there were bruises to his body and face.

The kidnappers asked for a HK$70 million ransom in bitcoins.

It was revealed that police have asked assistance from Google, as the suspects allegedly used Gmail to send threats to Wong’s family. The tech giant has refused to cooperate.