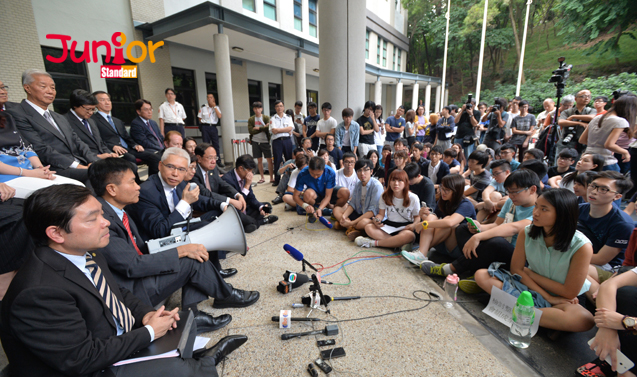 MEMBERS of Lingnan University Council (嶺南大學校董會) held direct talks with students outside the Wong Administration Building, but failed to reach a consensus with them.

The talks came as a group of 30 students staged a sit-out at the venue of the meeting demanding answers on members’ stance on academic freedom and the council’s structural reform.

They also demanded the council set up a task force to scrap the automatic appointment of the chief executive as the university’s chancellor.

Some of the students tried to gate-crash the council meeting and demanded members face them.

Council Chairman Rex Auyeung Pak-kuen (主席歐陽伯權) said later the council will discuss whether or not to set up a special task force to study the possibility of amending the Lingnan University Ordinance (嶺南大學條例) as demanded by the students.

The students called on the council to review the appointment system of council members, under which 18 of the 33 council members are appointed by the chief executive. Lau said this could damage the school’s academic autonomy.

He called the system “an evil law left behind by the British colonial period”.