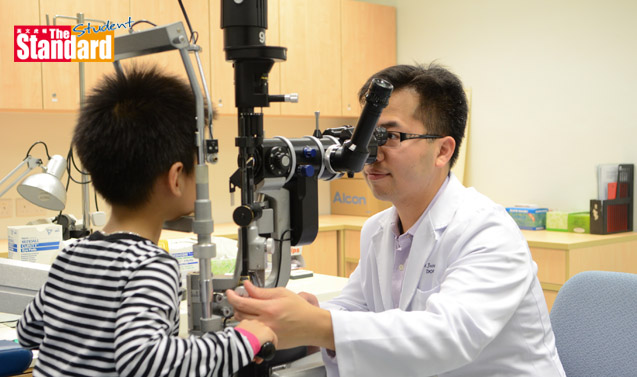 SEVEN out of 10 children from poor families do not receive regular eyesight screening, a survey has found, leaving them at greater risk of eye disorders going untreated at the best time for a fix.

The survey also found less than half of 407 parents (43 percent) with children aged six to 13 recognised the importance of preschool sight tests. The Eye Care Charitable Foundation (睛彩慈善基金) commissioned the Chinese University of Hong Kong (香港中文大學) to conduct the survey on parents’ awareness and attitudes towards paediatric eye diseases.

Assistant professor Jason Yam Cheuk-sing (任卓昇), of the university’s department of ophthalmology and visual sciences, said children who miss out on vision screenings are exposed to the potential risk of eye disorders including amblyopia, squint and short-sightedness.

These eye diseases should be treated during the critical age of zero to eight but almost half of the parents did not know about the golden period for therapy.

“If diagnosis takes place after age eight, it may be difficult to treat any visual abnormalities,” he said. “Parents should take heed that visual impairment resulting from delayed treatment may ruin their child’s life.”

The survey also found that only 13 percent of children read in adequate lighting by using a desk lamp and the remainder rely only on room and ambient lighting.

Foundation chairwoman Emily Yeung Fung-yee (楊鳳儀) said the survey had revealed that paediatric eye health is a pressing problem in Hong Kong. She said the foundation’s future work would focus equally on prevention and treatment.

The foundation has collaborated with community groups to provide vision screenings since June last year. It also offered free surgery to 17 cataract patients in June this year.