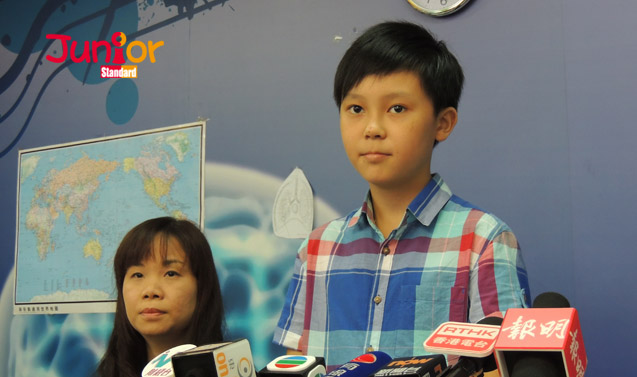 A father is seeking Education Bureau (教育局) permission for his new migrant son to be homeschooled by memory masters as he is not satisfied with conventional teaching.

Nathan Lee For-shing (李科成), 11, who arrived in Hong Kong from the mainland in May with his mother on a one-way permit, completed Primary 4 in Guangxi (廣西), but his father Michael Lee feels that Hong Kong's education system is unsuitable for him.

The father applied to at least 10 local schools for his son to start Primary 5 in the new academic year, but received no reply.

He sent a letter to the Education Bureau earlier this month for approval to ‘homeschool’ the boy, paying HK$1,900 a month to the Hong Kong Memory Study Association (香港記憶學總會) to do so.

Association chairwoman Miki Lee Yuk-kuen (李玉娟) has designed a course curriculum for the boy, and aims for him to take the Chinese and English language International General Certificate of Secondary Education examination next year.

This is equivalent to the Form 5 level exam.

Nathan’s level of Chinese is about Primary 4, but his English is Primary 1 level. His father would like him to study further in Australia (澳洲), saying its teaching methods are different from those at local schools.

“I was under much pressure when studying in the mainland. When I could not get the grades expected by the teachers, I would get penalties,” Nathan said.