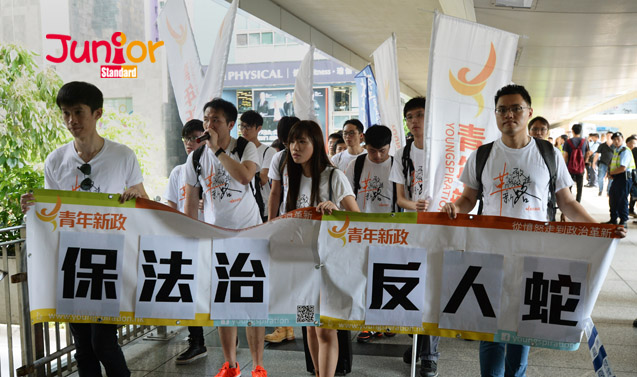 HUNDREDS of localist activists protested on Monday to demand the deportation of a 12-year-old boy who has been living undocumented in Hong Kong for nine years.

Protesters, who marched from Causeway Bay (銅鑼灣) to the Immigration Department (入境事務處) offices in Wan Chai (灣仔), included members of Hong Kong Indigenous (香港本土力量) and Youngspiration (青年新政). They held placards saying “Protect the rule of law” and “Anti-illegal immigrants” while chanting “Go back to the mainland”.

But as the office was closed, the protesters plastered their declaration on the wall and sprayed pesticides before leaving.

Meanwhile, Federation of Trade Unions (工聯會) lawmaker Chan Yuen-han (陳婉嫻) admitted she may have overstepped the mark in providing help to the boy. But she has no regrets.

“My representing him could be considered as overstepping because he was hidden for nine years. He broke the law. But how that law-breaking act should be judged, I don’t know,” she said.