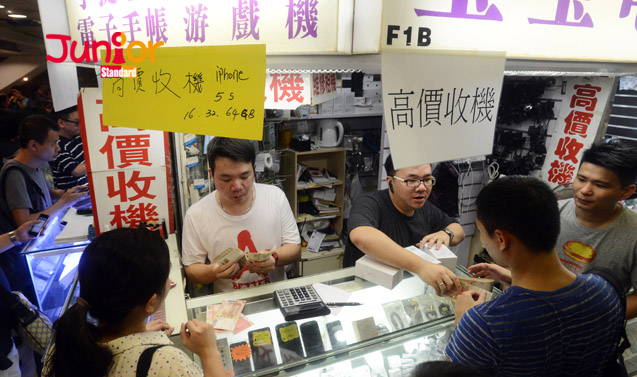 Hongkongers love speculation. They speculate on everything – from stamps, concert tickets and designer handbags to property. Why are we so obsessed with making a quick buck in our city?

WHENEVER new models of smartphones come on the market, we see people queuing up outside retail outlets – even overnight in many cases. Some of these are end users eager to get their hands on the latest gadgets. But many are ‘speculators’ buying just to sell for a quick profit.

Clearly, Hong Kong people have a knack for speculation. They can turn almost anything into an item for speculation. Just how widespread is it? A 2014 survey found:
• one in four people have taken part in speculative activities;
• electronic gadgets are the most popular goods for speculation (23 percent);
• other items included coins (18 percent) stamps (7 percent) show tickets (4 percent); designer handbags (3 percent) and sports shoes (2 percent).

Working hard and saving up is no longer seen as the route to a better life. Instead, people believe in seizing every opportunity to grab money now.

Don’t burst the bubble
WHAT is wrong with the desire to make money? After all, who does not like money? Speculation is highly risky because speculators may lose a lot of money if no one buys their goods. If speculators are facing high risk, so be it. How would it harm society if someonelost some money on speculation? Some people ask these questions in defence of speculation.

That might be true for non-essential and small items like phones or concert tickets. But speculation in residential property couldwreak great havoc on society. Speculation could create a housing bubble. When it bursts, the backlash could bring down banks, ruin economies and even bankrupt countries.

That was what happened to the world in the 2008 financial tsunami and the Asian financial turmoil in 1997. That is why the government has been taking measures to keep speculation on residential properties in check.

Speculation is generally not against the law. But does it mean that we should all jump on the bandwagon? That is a question we should take some time to ponder.