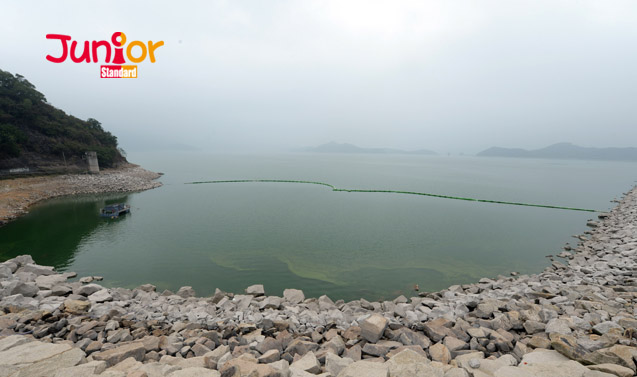 We are lucky to be living in a city with adequate clean water. But it does not come cheap. Junior Standard looks into the secrets behind our water supply

THERE are 17 reservoirs in Hong Kong ─ some tiny, some very big.The smallest one is Tai Tam Byewash (大潭副水塘), which can only hold 80,000 cubic metres. The largest two are Plover Cove (船灣淡水湖) and High Island (萬宜水庫), with a capacity of 229 million and 281 million cubic metres respectively.

The total storage capacity of these reservoirs amounts to 586 million cubic metres. But it is far from enough to meet our water demand – accounting for only 19 percent of water consumption.

Dongjiang water (東江水)
WATER from Dongjiang (東江), Guangdong (廣東), is in fact the biggest water source for Hong Kong. Hong Kong started to get water from Dongjiang in 1965. Since the late 1990s, 70-80 percent of our annual demand is supplied by Dongjiang water. In 2013-14, 598 million cubic metres of Dongjiang water was imported, slightly more than the total storage capacity of our reservoirs.

But we do not get Dongjiang water for free. Under an agreement with Guangdong, Hong Kong paid HK$13.5 billion per year for the water. This works out to about $5.5 per cubic metre. The Dongjiang water supply agreement had been controversial as previous arrangements were not flexible. But this has been changed. The present “package deal lump sum” approach is more flexible to take account of our actual need. This would enable Hong Kong to have better control of the storage level in reservoirs, making it easier to reduce overflow and save pumping costs.

Sea water
HONG KONG uses sea water, not for drinking but for flushing toilets. A total of 274 million cubic metres of sea water is used for this purpose every year. But sea water can be used for drinking too – by taking out the salt. This process is called desalination. Hong Kong used to have a desalination plant at Lok On Pai (樂安排). But it only operated for a few years and was closed due to the high cost of water production.

However, the government is again planning a new desalination plant, this time in Tseung Kwan O (將軍澳). It is expected to open in 2020, and will meet about 5 percent of total demand. This is made feasible by new desalination technology called “reverse osmosis”, which reduces the cost to produce water from HK$35 in the 1970s to HK$12 per cubic metre at present.

Conclusion
AS the government pointed out, providing an adequate water supply in Hong Kong has always been difficult as we have no natural lakes, rivers or substantial underground water sources. So we have to spend a lot of money to import water. Water treatment to ensure the supply meets acceptable quality for consumption is also costly. So, next time you turn on the tap, think water conservation!