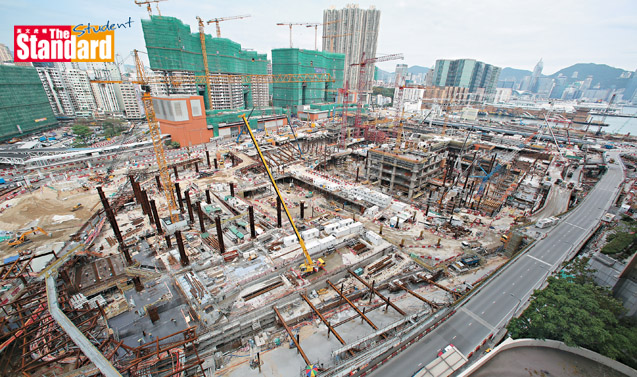 THE price tag for the troubled cross-border express railway will go up by HK$18 billion to a staggering HK$90 billion, the chairman of the Legislative Council (立法會) transport panel said.

Michael Tien Puk-sun (田北辰) said it is pragmatic to estimate that the construction cost of the Guangzhou-Shenzhen-Hong Kong Express Rail Link (XRL, 廣深港高速鐵路香港段) will soar to HK$90 billion because of a two-year delay in the project.

“What I can only say about the cost is that the overbudget is higher than the one I estimated earlier, which was about HK$20 billion. The management said it was unacceptable and returned it to the subordinates for discussion again ... HK$90 billion might be the final cost,” Tien said.

Tien urged the government to start discussing with the rail operator how the soaring construction costs will be shared.

Democratic Party (民主黨) lawmaker Wu Chi-wai (胡志偉) criticised the government for not yet explaining to Legco how the government will share the cost with the MTR Corporation (MTRC).

Professional Commons (公共專業聯盟) policy committee convener Albert Lai Kwong-tak (黎廣德) believes the final price may still be even higher as contractors make up for lost time in the delayed construction.

A spokesman for the MTRC said they had stated in last year’s annual report that the construction cost of the rail link will increase because of the complexities of the project.

The cost and deadline are still under review.

Meanwhile, a key part of Hong Kong’s infrastructure will become non-operational in a few years. A source close to the Airport Authority (機場管理局) said that Hong Kong International Airport’s Terminal 2 (香港國際機場二號客運大樓), which has been in operation for 13 years, will be completely shut down for four years from 2019 as part of expansion work in preparation for the third runway.

According to the third runway system design announced earlier, Terminal 2 will be modified and expanded for providing a full-service processing terminal and construction of an associated road network.