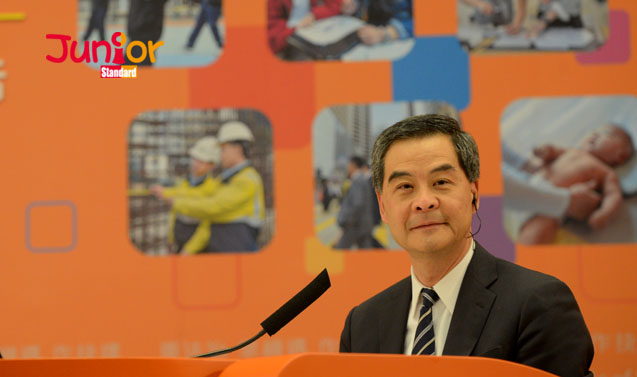 Public policy is not just the affair of adults; it also affects every teen in both the short and long run. Junior Standard highlights some new policies in four key areas of concern

Population and housing
1. Lure the children of emigrants back to Hong Kong and relax the arrangement for overseas talents to enter;
2. Extend the retirement age, and reserve HK$50 billion for the poor elderly;
3. Look further into whether to offer basic subsidies to all eligible children for half-day kindergarten education;
4. Provide 6,650 flats under the Home Ownership Scheme (HOS, 居屋), and increase the average production of private flats to 14,600 from the past five years’ 11, 400.

Long-term challenges
AGEING is affecting Hong Kong’s long-term development. Due to the decreasing birth rate, the government projects that one third of the population will be older than 65 by 2041, double the current proportion.

The government plans to tackle the effects of a smaller workforce by unleashing the potential of the local labour force, nurturing local manpower and recruiting talent from outside Hong Kong. For example, the retirement age will be extended to 65. Chief Executive Leung Chun-ying (梁振英) proposes to attract more second-generation emigrants by allowing them to stay in the city for one year to look for work.

But that will increase the demand for already inadequate housing. Leung announces that the next five years will see 30 percent more private homes built annually as well as subsidised flats.

Education
1. Renew the curriculum of Science, Technology and Mathematics, Chinese History and World History;
2. Double the number of sister schools in Hong Kong and the mainland to about 600 pairs in three years;
3. Allocate HK$120,000 a year to each school to hold exchange activities – each student will be subsidised twice;
4. Increase the graduate teacher ratio in primary schools from the current 50 percent to 65 percent.

Learn more about China
LEUNG’S latest policy address indicates that he is planning to prompt students to know more about China, despite the setback in introducing Moral and National Education (MNE, 德育及國民教育科) in 2012.

As part of a two-pronged approach, on one hand, the government will double the number of local primary and secondary schools with mainland sister schools. Pupils will be subsidised to join mainland programmes at least once in primary school and once in secondary school – also two-fold from the current arrangement.

On the other hand, a government source says it is studying whether to add Chinese Modern History and Hong Kong History to the curriculum, as well as doubling class hours for lower secondary students. But it is unknown how the Education Bureau (教育局) will balance the accompanying increasing burden of coursework.

Facing the future
YOUTH, for the first time, has become a part of a section’s headline in the policy address. It shows that the government is trying to appease the young who showed resentment in recent protests by investing more in them and relieving their pressures.

The spotlight is put on a Youth Development Fund (青年發展基金), funded with HK$300 million to assist young entrepreneurs. Money, along with innovation and passion, are definitely crucial to start a business, but they are far from being enough. The government says non-government organisations (NGO) will monitor and review the start-ups’ performance and provide mentors if necessary.

The government also plans to subsidise university students who wish to volunteer under the United Nations’ programme in Southeast Asian countries.

Boost economic restructuring
THE Hong Kong government has been talking about restructuring the economy to a more technology-orientated one since the Handover. This year is no exception, despite the current financial and property-driven model.

An initiative highlighted this year is to build a ‘Smart City’ in a future core business district – Kowloon East. The government is planning to use new technologies to shorten the waiting time for pedestrians and vehicles at the traffic lights, and to provide them a shorter and more comfortable path. Wi-Fi will also be free in that area.

Meanwhile Leung also proposes to inject more money into the Innovation and Technology Fund (創新及科技基金), which is already funding more than 4,200 projects. A testing centre for TCM will be established so that Hong Kong can make a world breakthrough by setting standards for Chinese boiled medicines (中藥飲片).