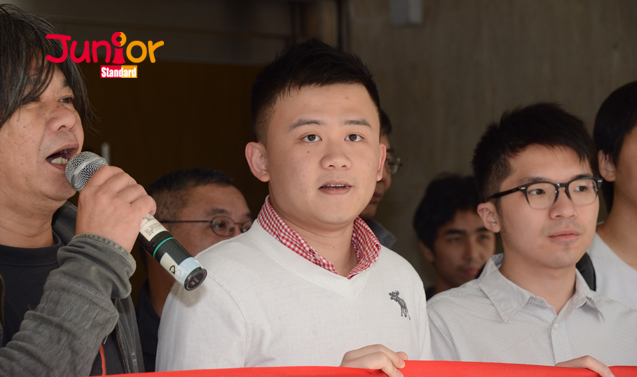 A RADICAL pro-democracy activist who threw eggs at Financial Secretary (財政司司長) John Tsang Chun-wah (曾俊華) began serving his three-week jail sentence last Wednesday after he failed in his appeal to quash his conviction.

Derek Chan Tak-cheung (陳德章), 25, secretary general of the League of Social Democrats (LSD, 社民連 ), sought to overturn his conviction for common assault in the Eastern Magistrates’ Court (東區裁判法院) in November last year. He had been out on HK$500 bail until his Court of First Instance (原訟法庭) hearing yesterday.

Chan hit Tsang’s forehead with two eggs during a public forum on the budget on Java Road (渣華道) in North Point (北角) on 7 December 2013. The defence said Chan’s action was not intentional and that he threw the eggs after he was barred by a security guard from entering the venue.

Pang rejected the defence assertion that the three-week sentence was too heavy for an egg-throwing incident.

He said it is an assault as “one can get injured when hit by eggs, apart from one’s shirt being stained.” Pang also said Chan insisted he did not do anything wrong, “so there is an increased chance” he would commit the offence again.

Ways of expressing opinions must not involve violence, he said.