WHO to tackle TB epidemic 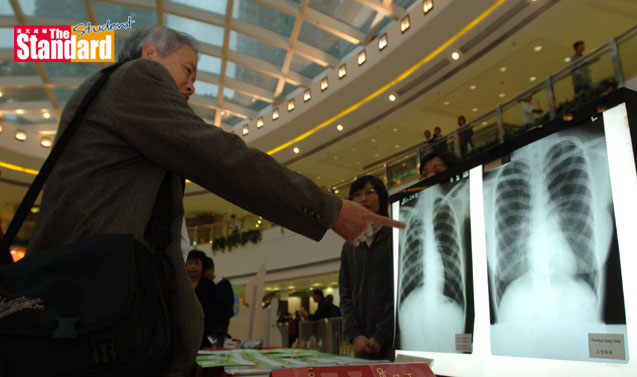 Chan, Hong Kong’s former director of health, said in Geneva (日內瓦) on 19 March, “Each and every man, woman or child with TB should have equal, unhindered access to the innovative tools and services they need for rapid diagnosis, treatment and care.”

This year is seen as critical for action to adapt and roll out the strategy in diverse country settings. World TB Day (世界防治結核病日) fell yesterday.

Eric Goosby, who was appointed UN Special Envoy (聯合國特使) on tuberculosis in January, said, “The progress that has been made in combating TB has been hard won and must be intensified if we are to wipe out the TB epidemic.”

In 2013, nine million people fell ill with TB, almost half a million of whom have a multi-drug resistant disease which is far harder to treat.

Meanwhile, eight newborn babies were urgently tested for tuberculosis on 19 March after a mother-to-be was diagnosed with TB at Princess Margaret Hospital (瑪嘉烈醫院 ), the infectious diseases specialist hospital.

The 25-year-old Hongkonger, who has lived in the mainland, was admitted to the antenatal ward of the hospital on 2 March after she went into premature labour.

But it was not until 10 days later, after she had given birth, that tuberculosis was suspected. The highly infectious disease was confirmed on the night of 17 March.

Princess Margaret Hospital – where an infectious diseases centre has been set up in case of flu epidemics or any other outbreaks – announced the alert late on 18 March.

Although TB usually attacks the lungs, other parts of the body can be affected as well.