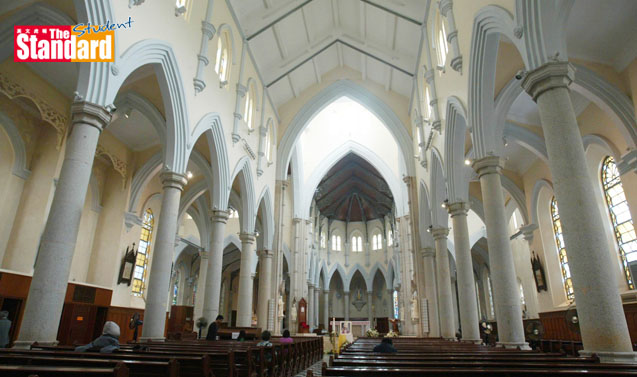 POPE Francis (教宗方濟各) flew home on Monday after a week-long trip to Asia (亞洲), where he called for unity in Sri Lanka (斯里蘭卡) after a civil war and asked Filipinos (菲律賓人) to be “missionaries of the faith” in the world’s most populous continent, after a record crowd joined his final Mass in the Philippine (菲律賓) capital.

President Benigno Aquino III (阿基諾三世), Catholic (天主教) church leaders and about 400 street children yelling “Pope Francis we love you” saw him off at a Manila (馬尼拉) air base, where the pontiff, carrying a black travel bag, boarded a Philippine Airlines (菲律賓航空) plane for Rome (羅馬). Standing at the top of the stairs, the pope waved, slightly bowed his head before the crowd and then boarded the plane.

Hundreds of thousands of flag-waving Filipinos lined Manila’s streets to get a final glimpse of 78-year-old Francis aboard an open-sided, white popemobile. As he passed, many shrieked, called his name and wept tears of joy.

“He’s my No 1 world leader,” said Rita Fernandez, a 63-year-old mother of four who stood on a street near the Apostolic Nunciature (教廷大使館) in Manila, where Francis stayed during his four-day visit.

“He rides on a bus. He flew to Tacloban (塔克洛班) to visit the typhoon survivors despite the storm and he stops to talk to the poor. He’s a living saint,” said Fernandez, who readied a mobile phone with a camera and wore a yellow shirt with the pope’s picture.

Amid the thick crowds, a man climbed up a tall ladder and unfurled a poster with a handwritten farewell message: “Dear Pope Francis, We love you! We pray for you. Please pray for us all.”

Such passion and devotion visibly energised the leader of a 1.2 billion-strong Roman Catholic church confronted by secularism, clergy sex abuse scandals and a number of other daunting problems.

Francis dedicated his four-day trip to the Philippines to the poor, marginalised and victims of injustice. He denounced the corruption that has robbed them of a dignified life, visited street children and travelled to the eastern city of Tacloban to offer prayers for survivors of Typhoon Haiyan, the deadly 2013 storm that devastated one of the country’s poorest regions.