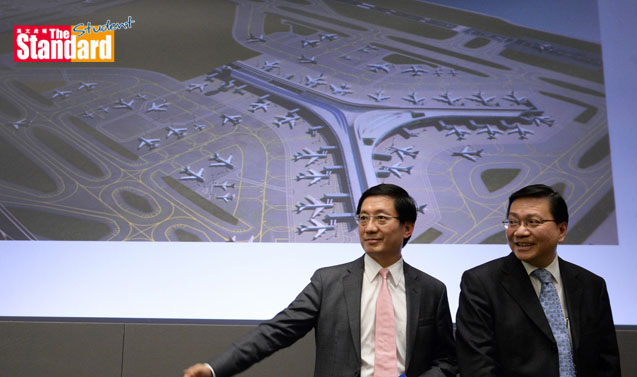 DEPARTING passengers will be charged HK$180 from next year and airlines 15 percent more to help fund the third airport runway, whose budget has ballooned to HK$141.5 billion.

The Executive Council (行政會議) on Tuesday gave the green light to the Airport Authority’s (機場管理局) three-runway system, which may be completed by 2023 if construction begins next year.

Authority chief executive Fred Lam Tin-fuk (林天福) and Secretary for Transport and Housing Anthony Cheung Bing-leung (張炳良) said the project will be funded by bank loans and bonds, the airport’s operational surplus and dividends, and by charging passengers and airlines.

As the government will not inject taxpayers’ money into the project, there is no need for it to pass through the Legislative Council (立法會), but Lam said the authority will welcome monitoring by lawmakers.

Lam also said the authority needs to reassess the exact amount of the airport construction fee for departing passengers, which is proposed at HK$180. Any further reduction would mean the authority would need to borrow more money from banks or issue more bonds.

Lam said, “The Chek Lap Kok (赤.角) airport’s fee-charging level for airlines is the second cheapest of 55 international airports and there is room for raising it.”

That fee will be increased by 15 percent, which would restore it to 2000 levels but still make the airport 53rd cheapest in the world.

The government will not accept authority dividends for 10 years, totalling about HK$53 billion, based on 2013-14 dividends of HK$5.3 billion.

“We are confident construction cost is reasonable,” Lam said. “Any overspending or overruns will be shouldered by the Airport Authority.”

He said the authority is closely watching a judicial review challenging the building of the third runway, as a year’s delay would add HK$7 billion to the cost.

The capacity target for the airport would be 620,000 flights each year with 102 flights per hour, compared to 68 flights now.