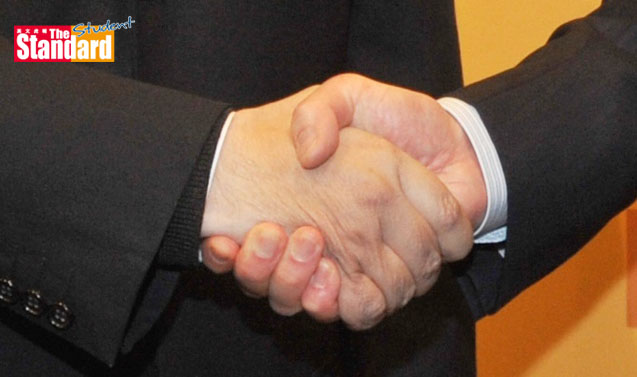 UN Secretary General Ban Ki-moon (潘基文) has urged the leaders of Japan (日本), China and South Korea (南韓) to work harder for reconciliation over their wartime past to ensure peace and stability in the region.

In his speech in Tokyo (東京) on Monday marking the 70th anniversary of the United Nations (聯合國), Ban said the lack of reconciliation among the three key players of Asia (亞洲) that are at odds over wartime history is “a missing link” for peace and stability in northeast Asia, despite the UN’s engagement. Ban urged Japan and two of its closest neighbours, both victims of Japanese militarist expansion in the first half of the 20th century, to develop forward-looking relations, while remembering the past.

“The United Nations has been engaging in a number of regional cooperative mechanisms but Northeast Asia still remains a missing link,” he said. “I sincerely hope that the dialogue between countries in the region, in particular Japan, China and the Republic of Korea, will proceed in a forward-looking manner,” Ban said.

“We must lay the ground for genuine reconciliation, harmony, peace and prosperity. In this context, I would urge the leaders in the region to be future-oriented, remembering the past,” he said at the UN University (聯合國大學) after participating in a disaster conference in northern Japan.

Japan’s relations with China and South Korea have worsened in the past few years because of disputes over history and territorial issues, with Japanese Prime Minister Shinzo Abe’s (安倍晉三) government seen as increasing efforts to revise the country’s stance on World War II atrocities.

Abe, speaking after Ban, did not directly respond to the secretary general’s request. Abe reiterated that Japan is built on “deep regret over the past war”, without making clear if the regret refers to damage it caused other Asian countries. He quickly moved on to Japan’s contributions as a peace-loving nation, and stressed its longstanding desire to play a more prominent role in the UN.

Japan has been calling for organisational reforms that include expanding the Security Council’s (安全理事會) permanent and non-permanent membership, but its push for a permanent seat was unsuccessful largely due to China’s opposition.