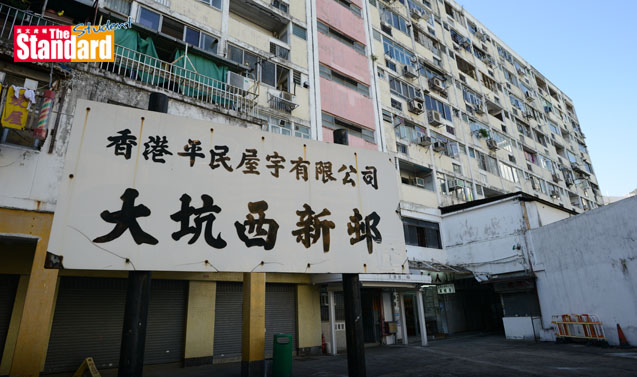 Analysts believe the policies will do little to reverse a rising housing market.

Property services firm Colliers International (高力國際) said the government is not able to control housing supply, doubting the target can be met.

“The effective supply at the end of the day ... is very much dependent on developers’ timelines,” Colliers said.

On public rental housing, the chief executive said the administration has stuck to its target of providing about 20,000 units over the next decade.

Aside from the two conventional government-funded schemes, Leung is also seeking to turn Tai Hang Sai Estate (大坑西.), currently owned by the Hong Kong Settlers Housing Corp (香港平民屋宇有限公司), into a project that might yield 3,000 to 4,000 homes, according to sources.

An untested approach is to pick apartments from the authority’s public rental housing developments and offer them for sale to qualified ‘green-form’ tenants at prices lower than HOS apartments.

To support expanding supply, Leung said 150 sites for residential use have been identified, 45 of which had received planning permission.

The MTR Corporation (港鐵公司) had also completed planning for its project near West Rail (西鐵.) Yuen Long Station (元朗站), where 1,880 units will be available.

In the medium to long term, the Kwu Tung North and Fan Ling North New Development Areas (古洞北及粉嶺北新發展區) will be an important source of housing and land supply.