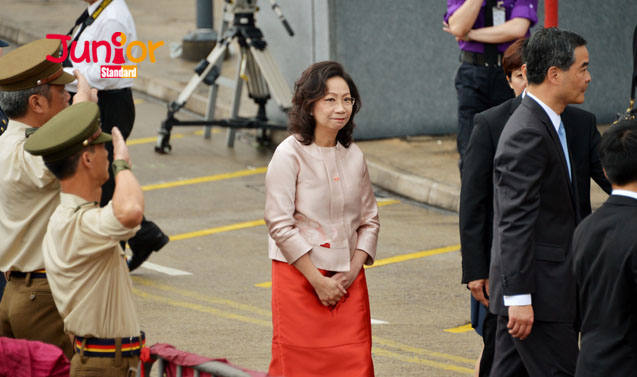 THE chief executive’s wife is taking the helm of a controversial new group launched on Sunday to educate Hong Kong youths about the responsibilities and duties of a Chinese citizen.

The opening ceremony for the Hong Kong Army Cadets Association (香港青少年軍總會) was held at the People’s Liberation Army’s (PLA, 人民解放軍 ) naval base on Stonecutters Island (昂船洲).

Membership is open to youngsters over the age of six of good character. The association plans to step up Hong Kong’s youth awareness, to enable them to understand their responsibilities and obligations as a Chinese citizen, as well as promoting harmonious relationships.

Thirteen uniformed groups attended the opening ceremony. They visited the PLA base and its facilities.

New Territories South regional commander Tony Cheung Chun-hung (張振雄) said the setup of the organisation is good and can strengthen youngsters’ discipline and interactions. He also said the idea is not to brainwash the children but to make them learn self discipline and to become useful citizens.