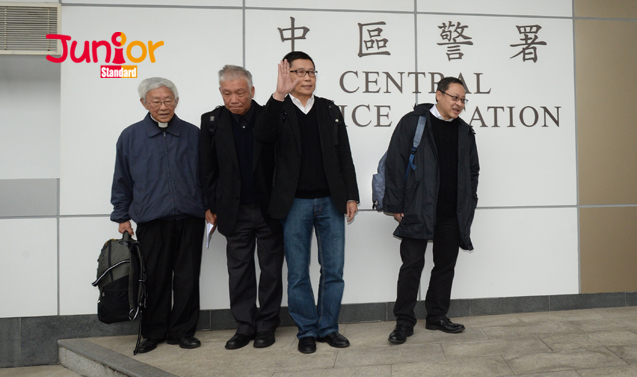 SIXTY-FIVE activists – including the Occupy Central (佔領中環) trio – surrendered to police last Wednesday but left without being charged.

Despite admitting taking part in unauthorised assembly, Occupy co-organiser Benny Tai Yiu-ting (戴耀廷) said, “We are not being arrested so we are allowed to leave without any restrictions on our liberty.

“I feel calm, and I think a bit relieved, also. We have completed at least what is our original plan.”

“I think they’ll arrest us for sure,” said Tai, who suggested that political considerations may have come into play on the timing.

“The only question is when. I don’t think they’ll just let us walk away.”

Surrounded by more than 100 supporters and journalists, the Occupy trio and Zen – all in black coats – were the first batch to enter the 10-storey police building tucked away at the corner of Sheung Wan’s (上環) promenade.