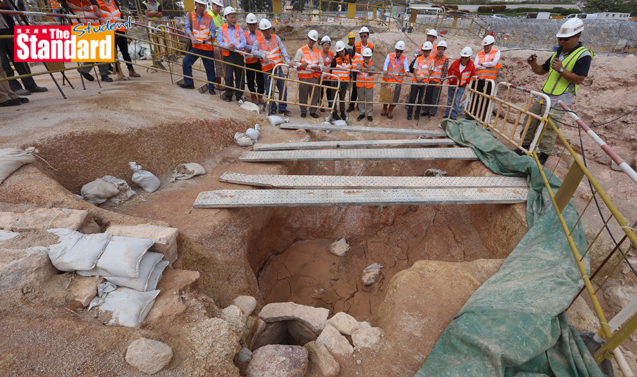 THE heritage board has decided on the cheapest no-delay option to ‘preserve’ the third Song dynasty (宋朝) well and aqueduct found at the future To Kwa Wan station (土瓜灣站) on the delayed Sha Tin-Central Link (沙田至中環.).

The Antiquities Advisory Board (古物諮詢委員會) last Thursday decided that option one, costing HK$10 million, would be the best choice for the well and its water channel.

Depending on the methods used, the cost could go up to HK$150 million, the MTRC (香港鐵路有限公司) said, but it would be much less than the HK$1.3 billion if the ancient structures are left untouched.

The stone well of the Song-Yuan (宋元) period named Well J2, and associated with an early 20th century stone water channel discovered on top of the station roof, will be removed and dismantled by hand.

It will then be stored elsewhere so construction – already delayed by 11 months – can resume.

Board chairman Andrew Lam Siu-lo (林筱魯 ) said: “We focused on the interpretation value and the heritage value of the well and also the water channel.

“In that sense, we decided on the proposal to dismantle the well by hand and reinstate it in the future

“With the flexibility confirmed by the MTRC, there is a possibility that we could reinstate the well and the duct at the same location.”

The MTRC said if the well is put back at the station at a higher height for display, the station will have to be expanded at an additional cost of HK$150 million.

Board members at Thursday’s meeting said they want to rebuild the structures at the original location but at another height.

Several archaeologists said the well will be more valuable if they can record and study it thoroughly rather than keep it at the discovery site.

Lam said the government had already decided to preserve in-situ two other wells, J1 and J5, but Well J2 was different.

“The biggest difference between J2 and other wells is it is an isolated one,” Lam said. “The cultural area around it was destroyed.”