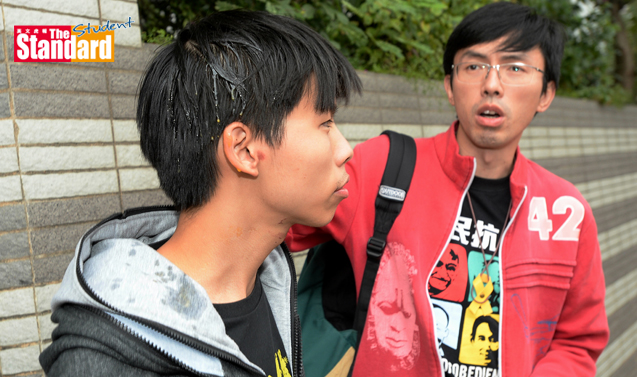 THE public face of Occupy Central (佔領中環), Joshua Wong Chi-fung (黃之鋒), student leader Lester Shum (岑敖暉) and other activists have been banned from the heart of Mong Kok as a condition of their bail.

The two students, along with 29 others, were barred from going to the area of Mong Kok bordered by Fa Yuen Street (花園街), Dundas Street (登打士街), Shanghai Street (上海街) and Mong Kok Street (旺角街) after appearing at Kowloon City Magistrates Court (九龍城裁判法院) on Thursday.

Scholarism (學民思潮) convener Wong and Hong Kong Federation of Students (HKFS, 專上學生聯會) deputy chief Shum were arrested during scuffles with police on Wednesday as they cleared one of the largest protest sites that have choked the city for 60 days.

Radical lawmaker “Long Hair” (長毛) Leung Kwok-hung (梁國雄) was also among the defendants, aged from 17 to 65, who are accused of obstructing police officers from carrying out their duties.

No pleas were taken and they are due to appear in court again on 14 January.

Wong, 18, and Shum, 21, claimed after appearing in court that they were assaulted by police officers following their arrests.

The prosecutor sought the ban for the 31 defendants as one of the conditions for their bail, ranging from HK$50 to HK$500, in order to deter them from re-offending.

Principal magistrate Peter Law Tak-chuen (羅德泉) allowed the prosecution’s request to ban Wong and the other defendants from the Mong Kok area. They can only travel through the area by transport or in transit.

Law warned Wong not to break the injunction.

“You must comply with the bail conditions otherwise prosecutors may apply to the court to ask to withdraw the bail,” he said.