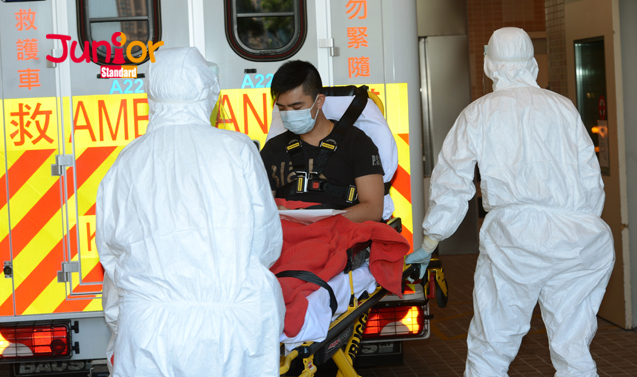 The World Health Organization (WHO) has described the Ebola virus disease as “the most severe, acute health emergency seen in modern times”. How did the situation get so out of control?

THE Ebola virus disease (EVD) was first identified in 1976. Once every two years or so, there have been outbreaks. All of these previous outbreaks happened in Africa (非洲), so people in the West did not feel an immediate sense of threat.

That was probably why rich and powerful countries did not do enough in fighting this very deadly disease.

The deadly face of Ebola
THE 1995 movie, Outbreak, has – to some degree – raised the awareness of people in Western countries to the horrifying reality of Ebola. Although the medical disaster film was about a fictional virus called Motaba, its effects were similar to EVD’s.

People first get infected with the Ebola virus which then causes EVD. Early symptoms of EVD are a sudden onset of fever, intense weakness, muscle pain, headache and a sore throat.

They would then vomit, and have diarrhoea, a rash as well as impaired kidney and liver function. There could be both internal and external bleeding in some cases. Up to 90 percent of Ebola patients die.

Biggest ever outbreak
THE outbreak that started earlier this year is different. Its scale has been the biggest in its history. So far, over 10,000 people in West Africa have been infected. The worst-hit countries are Sierra Leone (塞拉利昂), Guinea (幾內亞) and Liberia (利比里亞).

According to WHO, over 4,900 people have died from the disease as of 27 October. There will be 10,000 new cases a week by the middle of November or December.

Also, the disease has spread, for the first time, to Western countries. Cases were reported in Spain (西班牙) and the United States (美國).

Western apathy
IT has been almost 40 years since EVD has been identified. But it seems little has been achieved by way of controlling it. A vaccine has not been developed. Experimental vaccines have only just been prepared for trial test.

After the initial outbreak, Medecins Sans Frontieres (MSF) were left to deal with the situation. Despite its urgent plea, Western countries failed to react adequately.

In late October, scientists warned that the current level of international response will not bring the outbreak under control.

How to avoid catching Ebola
THE Ebola virus which causes EVD is spread from infected animals to humans. It is then spread among humans through contact with the bodily fluids of infected people.

To reduce the risk of catching the virus, avoid travelling to affected areas. Observe good personal and environmental hygiene. Use liquid soap or alcohol-based hand wash to clean the hands before touching your eyes, nose and mouth.

Avoid close contact with feverish or ill persons. Do not touch the blood or bodily fluids of patients or items that have been so contaminated.