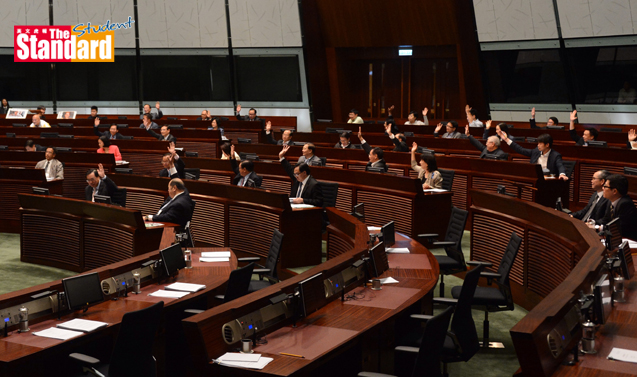 LEGISLATIVE Council (立法會) president Jasper Tsang Yok-sing (曾鈺成 ) described the claim that the government’s withdrawal of items to be discussed amounts to interfering with a committee’s work as a gross misunderstanding of Legco rules.

The government had earlier withdrawn 13 livelihood-related items from the public works subcommittee, as its chairman and Civic Party (公民黨) lawmaker Alan Leong Kah-kit (梁家傑) was about to rule that the agenda could be rearranged to deal with non-controversial issues first.

While the subcommittee chairman has the power to decide on the agenda, Tsang said, the government has the right to choose which proposals it puts forward.

Tsang said he will not get involved in the controversy over the change of agenda items.

Tsang said if each side uses its power, it will not help resolve the problems.

Leong had earlier accused the government of practising what he called “executive autocracy”.

Before the government withdrew the items, at the top of the agenda were controversial construction projects remaining from the last legislative year.

The agenda now has just seven items for the next meeting today.

Earlier, the Democratic Party (民主黨) lawmaker Sin Chung-kai (單仲偕) had proposed to first push 12 of the less controversial items to the top of the agenda.

Pro-establishment engineering sector lawmaker Lo Wai-kwok (盧偉國) said arranging the order of items is the government’s duty. It was unscientific to judge which items were less controversial, he added.

Last month, pan-democratic lawmakers made a surprise grab for the chairmanships of the public works and establishment subcommittees.

More than 20 democrats signed up to join the subcommittees minutes before the deadline for a reshuffle.