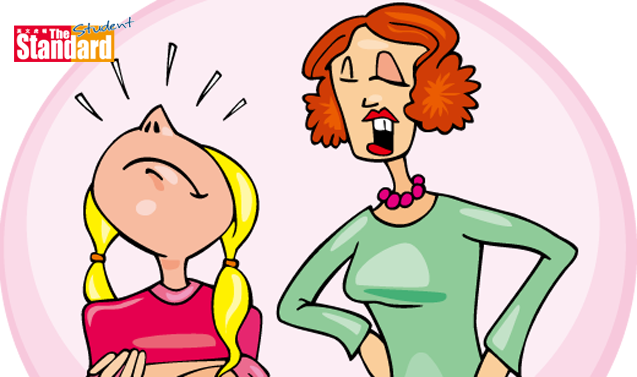 Family relationships can be strained when children start to think and act independently. Lakshmi and her daughter Shakti air their feelings about the parent-teen dynamic as they both grow older.

I AM a mother in the throes of one of life’s greatest challenges: trying to parent an about-to-be teenage girl. What is it about this stage of life that completely reduces me to someone I have fought all my life not to be: a screaming shrew with little self-control to be patient, calm or, most of all, rational?

According to experts, including psychologists, doctors, teachers and even experienced parents, this is a passing phase. Something to be endured for as long as one to eight years. “Just bear with it” is the comforting refrain, “it will soon pass”. Not soon enough for me.

Now when she tries to assert her obviously independent mind, I protest. And the battle begins. Contradiction because for all the exhortations to “be yourself”, I still want her to be a recognisable, rather than unfamiliar, reflection of my own hopes and dreams.

What was I like to my mother at the same age? I have cloaked the memories in such a way that I cannot really recall the battles, the screeching, the slamming of doors. I cannot evoke as much passion in my own relationship with my mother as a pre-teen as my daughter seems to induce in me. It is too late to ask my own mother now.

But I know it is selective memory. I also know that as she passes – oh please, let it be sooner rather than later – this phase, culling these moments of carnage from the mind will also occur. They have to. Otherwise how does one explain adult mother-daughter relationships that are so full of love and joy, and on the part of the mother, admiration, for what our child has become?

What is wrong with my mother?
It seems that every time my mother opens her mouth it is to say ‘No’. No, you cannot have this. No, you cannot do this. No. No. No. Then when I ask, ‘Why not?’ I get an answer so long and complicated, I give up wanting to know why in the first place.

My mother just cannot seem to make up her mind. Sometimes she says she wants me to be an independent individual and to have my own identity. Then when I try, she just gets worked up!

I do not really understand why she is so unreasonable. I just want her to mellow out and be like she was before. Until that happens, I will just keep doing my thing and be happy that I have got my really cool headphones for company at home!
- Shakti