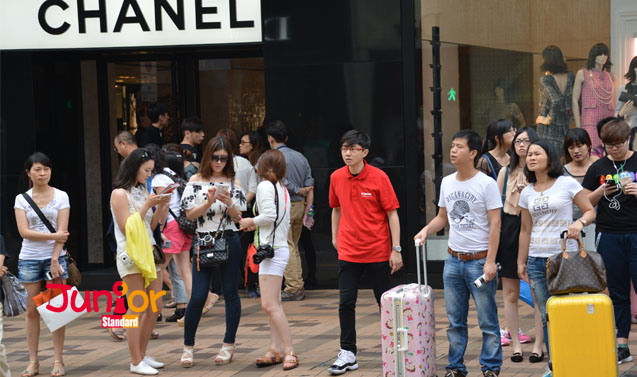 PEOPLE’S Daily (人民日報) said in a commentary on Monday that Hong Kong should cap the number of mainland tourists.

Ximeng Zhao’s (西蒙周) article in the overseas edition said the livelihood of Hongkongers had been changed even though travelers had been supporting the economy.

“Everyone would like to see more visitors coming to Hong Kong, but they can no longer endure the ‘torture of crowdedness’,” he said.

Zhao said of the 54 million visitors to the city last year, 70 percent were mainlanders.“Mainland visitors were the gold masters of Hong Kong and deserved to be treated royally.As such, Hongkongers had little choice but to keep their dissatisfaction in their hearts,” he added.

The author said scolding mainland tourists is impolite. He added that it is urgent “to relieve the uneasiness” as discontent is bound to grow. It asked Hong Kong to make reference to Taiwan (台灣), which has a daily quota of 3,000 mainland visitors.

However, Secretary for Commerce and Economic Development (商務及經濟發展局局長) Greg So Kam-leung (蘇錦樑) stressed that Hong Kong “will not close the door to business”.

He added that the matter will be discussed with the central government so that economic development and Hongkongers’ livelihood will be in proper balance.