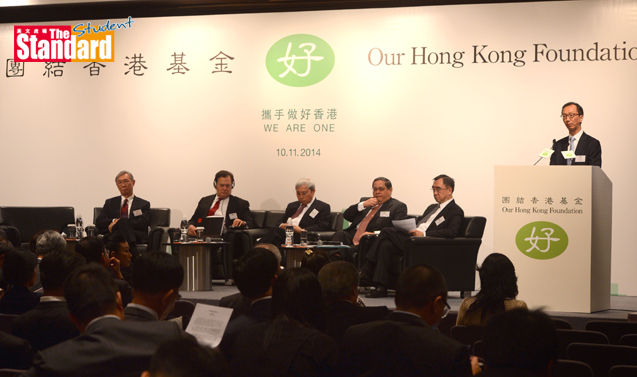 Speaking at the launch of the former chief executive’s Our Hong Kong Foundation (團結香港基金), Leung suggested that a fund should be established to help young people start their own businesses.

A high-level youth committee and initiatives should also be set up to assist them in owning their own flats.

Last week, Leung said he will leave it “up to God” when asked in an interview whether he will run for chief executive in 2017.

Addressing more than 100 guests and foundation advisers at the Hong Kong Convention and Exhibition Centre (香港會議展覽中心), Leung said it was a “mistake” for Hong Kong not to focus on nurturing young talent and building a channel for them to climb the social ladder.

“I suggest the government, business and education sectors have a discussion with students to map out several proposals to resolve the problems concerning young people,” Leung said.

“Can the government and developers map out proposals to help young people buy flats in private projects, apart from building more public housing?”

A fund to start businesses would also be much more meaningful, while a high-level young people’s affairs committee would help coordinate related policy bureaus and redeploy resources to meet youths’ concerns, Leung said. He noted that diversified talents have produced enterprises such as Alibaba (阿里巴巴) and Tencent (騰訊), which in turn nurtured others. “But we do not have an Alibaba and a Tencent,” Leung said. “This says that Hong Kong has lagged behind when facing the new economy.”

Earlier Tung, who is a vice chairman of the Chinese People’s Political Consultative Conference (中國人民政治協商會議), spoke about youth discontent, one of the important missions of the foundation.

“University students are discontented about the lack of social mobility to move upward,” Tung said.

“Those who did not study at university cannot foresee a day to be successful. Many worry about not being able to buy a flat despite their efforts at work, due to soaring property prices.”