Ip wants a say for students 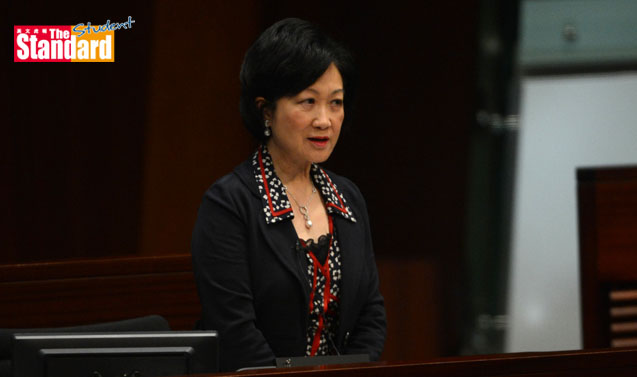 Ip said the 1,200-strong committee, which will vet candidates for the 2017 chief executive election, should include representatives of young people and women.

Ip, a lawmaker and Executive Council (行政會議) member, said the number of representatives from the agriculture and fisheries sector in the committee could be cut back, from 60 to 40.

Ip’s comments came after she and party members had a meeting with Chief Secretary (政務司司長) Carrie Lam Cheng Yuet-ngor (林鄭月娥), head of the three-person task force on political reform.

Lam’s talks last month with the HKFS, a key player in Occupy Central (佔領中環), failed to end the protest, which enters its 49th day today.

But Ip said the Scholarism (學民思潮 ) group should not be included as many of its members are still in school and some are aged below 18. Its convener Joshua Wong Chi-fung (黃之鋒), who is the public face of the Occupy Movement, just turned 18.

Ip said the government plans to table the proposed political reform to Legco (立法會) for voting in June or July, after a second round of consultation is held in the fourth quarter this year.

She said the government may consider allocating 20 places in the committee to young people, women and other sectors.

Meanwhile, a row is brewing over a proposed revision of the Liberal Studies course in secondary schools.

According to one report, pro-establishment lawmakers met with Leung on 10 October, during which they suggested the month-long Occupy Movement, was triggered by the subject.

Ip said the Liberal Studies curriculum was released after a long deliberation. If it is to be reviewed, it should be carried out by the education sector and not on the order of government officials.