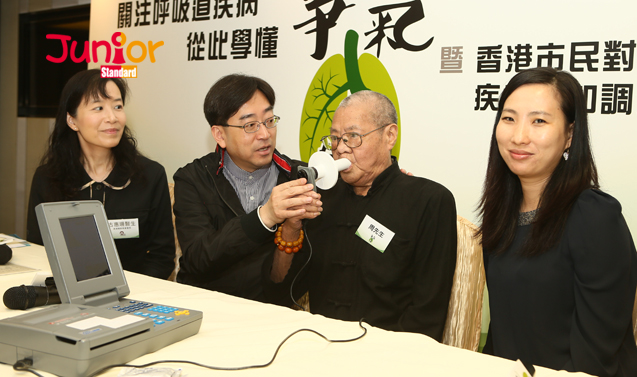 THREE out of five Hongkongers have no knowledge of lung disease and a third of those who know do not realise treatment is necessary.

About 1,000 people aged 18 and over were interviewed last month for the poll commissioned by the Hong Kong Thoracic Society (香港胸肺學會).

Hong Kong Lung Foundation (香港胸肺基金會) vice chairman Tam Cheuk-yin (譚卓賢) said the disease is a common chronic lung condition characterised by an obstruction of lung airflow that interferes with normal breathing. Common symptoms include continual coughing, shortness or difficulty in breathing, and the deterioration of lung function, which will accelerate over time.

“Many people think occasional coughing and shortness of breath are normal, but in fact this is a sign of lung function deterioration and could signify that chronic obstruction lung disease has been developing for years.”

Tam said the treatment includes oral medication, spray medication, oxygen therapy or vaccines for prevention. He said it is also important for people to quit smoking and do regular exercise.