Rule of law most cherished 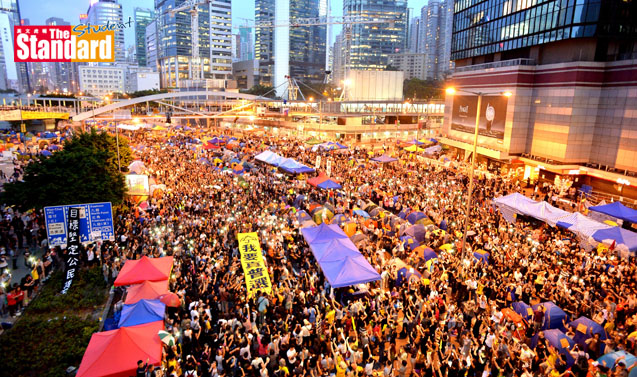 DEMOCRACY ranks only fourth among our most cherished core values, according to a recent survey conducted by the Chinese University of Hong Kong (CUHK, 香港中文大學).

Of 11 randomly presented core values, the highest percentage of respondents (22.9 percent) chose rule of law as the most important, followed by freedom (20.8 percent), and a just and corruption-free society (15.3 percent).

Democracy was singled out by just 11.1 percent of respondents, ahead of social stability (8.3 percent).

The results came last Thursday as the Occupy Movement entered its 33rd day, with protesters continuing their occupation in parts of the city despite the High Court (高等法院) having already ordered an interim injunction be continued against the Admiralty (金鐘) and Mong Kok (旺角) occupiers, until a formal judgement is reached.

The telephone survey to gauge public views on Hong Kong’s core values by CUHK’s Institute of Asia-Pacific Studies (亞太研究所) interviewed 804 Hongkongers over 18 years of age from 21 to 23 October. There was a response rate of 45.3 percent.

Further analysis of the findings revealed that respondents who rated the rule of law the top core value were dominated by the middle and upper classes, aged 31 or above, and who identified themselves as politically neutral or pro-establishment.

Those who voted for freedom and democracy were dominated by younger respondents aged 30 or under.