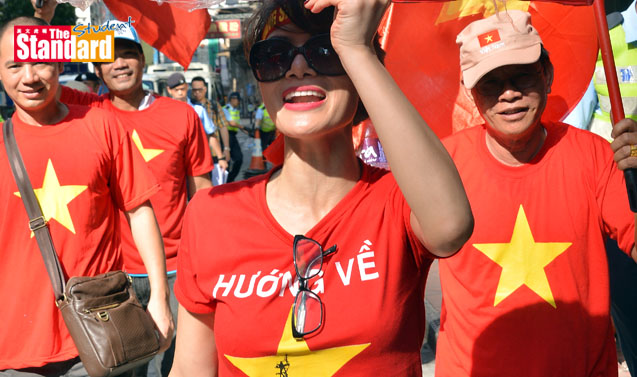 CHINA’s top diplomat was greeted warmly as he arrived in Vietnam (越南) on Monday to repair ties ruptured by disputes over the South China Sea (南中國海).

Relations between the two communist neighbours plunged to the lowest point in years after China in May deployed a giant oil rig near the Paracels (西沙群島), also claimed by Vietnam.

On Yang’s previous visit, Minh was serious and unsmiling, and the Chinese Foreign Ministry (中國外交部) quoted Yang as accusing Vietnam of disrupting the oil rig’s operations and “playing up disputes”.

On Monday, Vietnam’s Foreign Ministry quoted Yang as telling Minh that the two sides have made efforts to put their relations back on track.

“Currently, the bilateral relations have restored step by step,” the statement quoted Yang as saying. “The two sides should ... properly address and well control sea differences to create favourable conditions for bilateral cooperation.”

Minh told Yang that he was glad to see him again and was willing to work for closer ties.

“Hopefully with the common efforts by both countries, both sides, this meeting will produce positive results, creating a stronger impetus for the restoration and development of bilateral relations in a stable and healthy manner,” he said.

In Beijing (北京), Chinese Foreign Ministry spokeswoman Hua Chunying (華春瑩) said at a daily briefing that Yang was in Vietnam to help repair the China-Vietnam relationship that “plunged into temporary difficulty over maritime issues”.

“We would like to work with Vietnam to implement the consensus of the two (ruling) political parties and continue to improve bilateral relations,” she said.

A Vietnamese official familiar with the talks said on condition of anonymity that the two sides agreed to speed up their cooperation in other areas and the maritime disputes are only one of the issues discussed.

The two sides agreed to speed up easing maritime differences first such as the demarcation of the Tonkin Gulf (北部灣), he added.