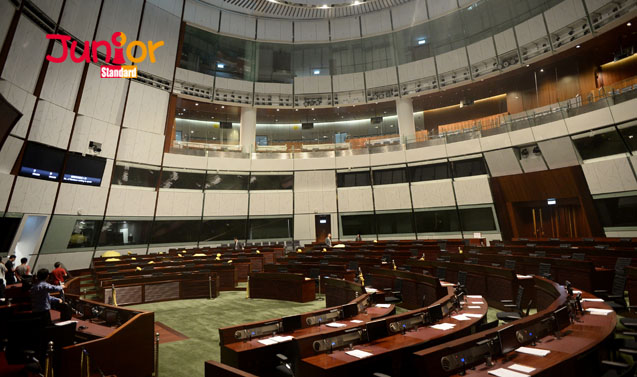 THE Legislative Council (Legco, 立法會) meeting, which was set to resume at 9am on 23 October, was cancelled last Thursday because of a lack of quorum when 36 lawmakers did not turn up.

The meeting was to have resumed a debate on a resolution to set up an innovation and technology bureau. Twenty pro-establishment (建制派的 ) and 16 pan-democrat (泛民主派的) lawmakers were absent. The meeting was aborted with just 34 legislators in the chamber within the 15-minute deadline. One more was needed to complete the quorum.

Federation of Trade Unions (工聯會) lawmaker Kwok Wai-keung (郭偉強), who was rushing to beat the bell, failed by just a few seconds. “All the roads in Admiralty (金鐘) are blocked by the OC citizens, causing traffic jams,” Kwok said, referring to Occupy Central (佔中). “[But] I don’t think this is an excuse for being late.”

Legco president Jasper Tsang Yok-sing (曾鈺成) announced the meeting was adjourned in accordance with rules of procedure. As this is not the first meeting since Occupy Central began, Tsang said lawmakers should have allowed time for traffic. He also said lawmakers who backed non-cooperation shall bear the consequences.

Secretary for Commerce and Economic Development Gregory So Kam-leung (蘇錦樑) expressed regret because “a lot of work had been done to prepare for the meeting”.