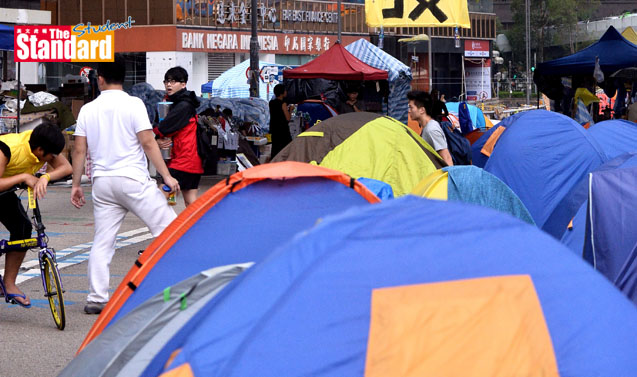 THE ‘Umbrella Square’ (雨傘廣場) vote on the way forward for the 29-day-old Occupy Central (佔領中環) protest to accept or reject government proposals unravelled hours before the first ballot was to be cast on Sunday.

Officials had offered during talks with student leaders last Tuesday to make a fresh report on public sentiments after the 31 August decision by the National People’s Congress Standing Committee (NPCSC, 全國人民代表大會常務委員會) on political reform and to create a platform for dialogue on post-2017 polls. Yesterday’s second thoughts came after representatives of Occupy Central, the Hong Kong Federation of Students (專上學生聯會), Scholarism (學民思潮), democratic lawmakers and local groups backing the Umbrella Movement (雨傘運動) gathered after taking soundings on what to do next at the three occupation sites.

Speaking on the movement’s fifth Sunday, Occupy Central co-organiser Benny Tai Yiu-ting said suspending the vote was “a very difficult decision” and reflected “very different views” but it had nothing to do with anti-Occupy activists.

“No one is perfect, and mistakes have to be admitted,” he said. Scholarism convener Joshua Wong Chi-fung said the pre-vote sounding process was a lesson for all, saying, “We’ve neglected many views of the occupiers, and for that we apologise.”

Civic Party (公民黨) lawmaker Alan Leong Kah-kit admitted that when the decision was made to go to a vote it was in “such haste that many of the questions that ought to have been considered” did not receive enough “care and attention”.

The first motion in the vote would have asked whether the report to the Hong Kong and Macau Affairs Office (國務院港澳事務辦公室 ) on public sentiment should demand the withdrawal of the NPCSC framework, while the second was whether the 2016 Legislative Council (立法會) election should not include functional constituencies and if the 2017 chief executive election should include civic nominations.