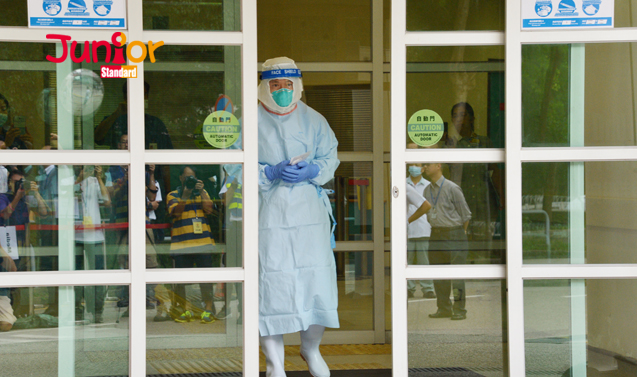 HONG KONG has enhanced measures to prevent the occurrence of the deadly Ebola (伊波拉) virus in the territory.

The beefed-up measures come after two healthcare workers in the United States (美國) were infected when caring for the first Ebola patient in the country, a man who travelled from Liberia (利比利亞).

Travellers with a light fever body temperature of 37.5C from Guinea (畿內亞), Liberia, Sierra Leone (塞拉利昂), Nigeria (尼日利亞) and Senegal (塞內加爾) will be reported. Centre for Health Protection (衛生防護中心) controller Leung Ting-hung (梁挺雄) said this can enhance the detection sensitivity at Chek Lap Kok (赤.角) airport and avoid an outbreak in the community.

There was one suspected case in Hong Kong on 8 October, but the person tested negative for Ebola. Public education has been stepped up with disease information updated with the co-operation of the Transport Department (運輸署 ), Housing Authority (房屋委員會), district councils and other departments.

Edwin Tsui Lok-kin (徐樂堅 ), chief port health officer for the Health Department (衛生署), said two counters have been set up at Chek Lap Kok as health monitor centres, which will distribute questionnaires to travellers who arrive from the five affected African (非洲的) countries, or are passport holders of those countries.