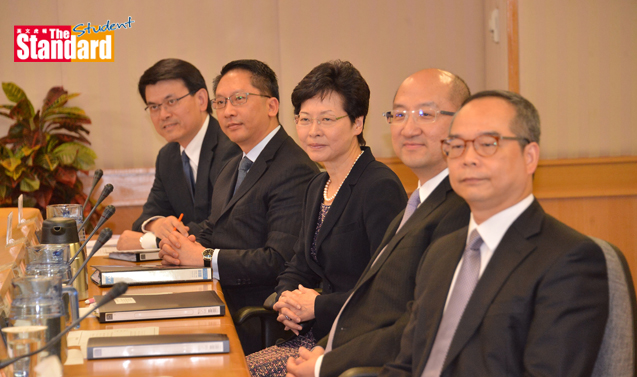 PROTESTERS have been promised a new report will be sent to Beijing (北京) that will spell out their sentiments and worries about the framework for political reform.

The government will also explore the option of setting up a platform for young people and students to be involved in discussions on political development beyond the 2017 chief executive election.

But the Federation of Students (HKFS, 專上學生聯會) said last night the umbrella movement – in its 27th day today – will continue as there has been no concrete response from the government, despite the two-hour talks shown live on TV.

The government said it was disappointed that the students said they had failed to see any concrete proposals.

Lam promised the government is “proactively considering in an appropriate way and appropriate channel” to submit a fresh report to the Hong Kong and Macao Affairs Office (港澳事務辦公室 ). The report will document the views from various quarters, including students, on constitutional reform after the 31 August decision on the framework for the 2017 chief executive elections was handed down by the National People’s Congress Standing Committee (全國人大常委).

Tuesday night’s first dialogue at the Academy of Medicine (醫學專科學院 ) between Lam and four top officials and five leaders of the HKFS were held after the 10 October dialogue was cancelled at the last minute following the student protesters’ announcement of an expanded Occupy Central (佔領中環) movement.

At a press briefing, Lam said she hoped Tuesday night’s talks would be the first of several.

But she conceded, “As far as their position is concerned, I’m afraid we can only agree to disagree.”

Lam said the issue of a more open and competitive nominating system could be explored in the second round of consultations.

But the HKFS secretary general Alex Chow Yong-kang (周永康 ) said, “It seems the government is showing some directions to solve the problem, but are they only empty promises or are they real? How do these solutions work?”