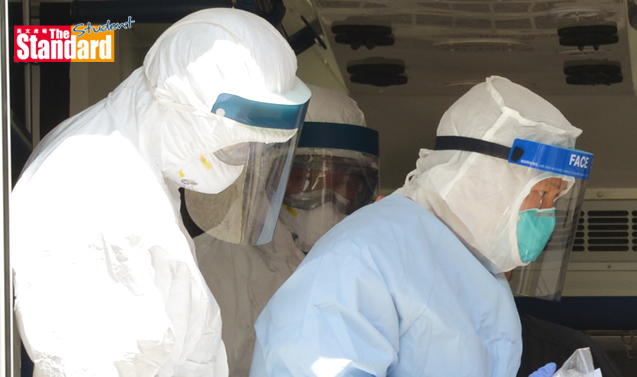 EUROPEAN (歐洲) foreign ministers met on Monday under pressure to lift their response to the Ebola epidemic after warnings it may become the “disaster of our generation”.

Ahead of the talks, aid agency Oxfam, which works in the two worst-hit countries Liberia (利比里亞) and Sierra Leone (塞拉利昂), issued a stark call for more troops, funding and medical staff.

“There is a very strong political focus on this as the most immediate crisis facing us,” a European diplomat said ahead of the meeting in Luxembourg (盧森堡).

Another European Union diplomat said Britain, which has a navy ship bound for Sierra Leone laden with medical staff and supplies, hopes to “galvanise EU action on Ebola”.

The diplomat added, “There is a real sense that this is a tipping point and we must get to grips with it now. If we can deal with it in the country, we don’t have to deal with it at home.”

The worst outbreak of the virus has killed more than 4,500, mainly in Guinea (幾內亞), Liberia and Sierra Leone, but isolated cases have now begun to appear in Europe and the United States.

Oxfam chief Mark Goldring said the world is “in the eye of a storm” as the charity warned Ebola “could become the definitive humanitarian disaster of our generation”.

US President Barack Obama also cautioned against hysteria after false alarms among the public scared by the news that two nurses contracted Ebola after treating a Liberian patient who died on 8 October. “This is a serious disease, but we can’t give in to hysteria or fear,” he said.

In the latest such case, the US Coast Guard on Sunday retrieved a blood sample taken from a Dallas healthcare worker isolated aboard the cruise ship Carnival Magic in the Gulf of Mexico (墨西哥灣). The woman, who cared for Ebola victim Thomas Eric Duncan, is showing no symptoms of the disease.

Obama played down speculation of a travel ban, as World Bank chief Jim Yong Kim rapped countries for being overly focused on securing their borders.

The UN has appealed for nearly US$1 billion (HK$7.8 billion) to combat the spread of Ebola, but so far has only received US$386 million from governments and agencies around the world, with a further US$225 million promised.