Police under the microscope 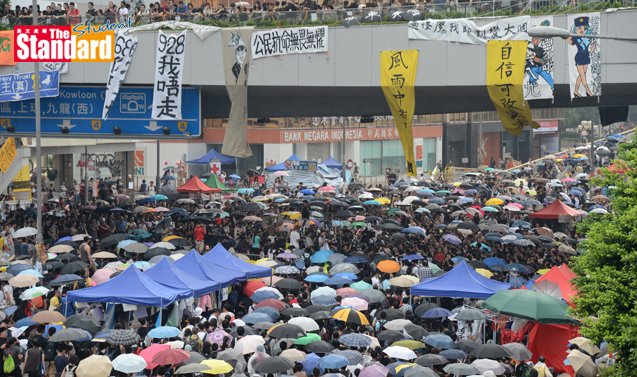 Mass demonstrations on the streets have rocked Hong Kong and raised questions about the impartiality of the police. Was the deployment of tear gas and pepper spray on protesters oppressive, or was it a justified means to maintain law and order?

The biggest issue today is whether Occupy Central and the demonstrations it spawned all over the territory are a noble cause or a misguided fiasco.

But many citizens were enraged by the chaos it caused as the protests paralysed traffic, interrupted normal daily life, disrupted government operations, and seriously hurt businesses and the economy.

Controversy also plagued proponents and participants of the demonstrations, with some accusing Occupy Central of “hijacking” the student rally at the initial stages.

APART from these core issues, the way the police handled the situation has also sparked debate. There were many issues, including accusations that the police were “condoning” or even “colluding” with triads to launch attacks on protestors.

The initial focus was on the use of tear gas and pepper spray on protestors outside government headquarters on 28 September.

Dramatic scenes of police and demonstrators clashing on smoke-filled streets dominated news footage and front pages of newspapers the next day, not only locally, but in the international media too, as various media highlighted in their headlines the deployment of tear gas.

THE police were condemned for “using excessive force on unarmed citizens”. Demonstrators were outraged. Hundreds of lawyers held a candlelight vigil to express indignation. A UK supplier even said it would “review its policy” on selling tear gas to the Hong Kong police.

Such reactions must be viewed against the fact that tear gas has been rarely used by the Hong Kong police. After all, mass demonstrations here usually have been conducted in an orderly manner, a fact that amazes some in Western countries where street protests are more violent, both on the part of demonstrators and the police.

THE day after, the police held a press conference to explain their actions, saying that they employed “minimum force” against protestors who repeatedly charged police cordon lines.

Assistant Commissioner Cheung Tak-keung said police needed to resort to pepper sprays and batons, as well as using tear gas, 87 times at nine locations to maintain a distance between the protestors and officers to prevent injuries.

Such actions were taken in accordance with strict internal guidelines, he said, and police have exercised “a high degree of professionalism and restraint to maintain public order and safety”.

The kind of tear gas used in Hong Kong is an irritant substance that creates a temporary hot sensation and causes tear streaming, police say. The effects only last a few minutes without having a permanent effect on health, and recovery time is relatively short. In that incident, 41 people suffered minor injuries, including 12 police officers.

Security specialist Steve Vickers, a former Hong Kong police officer, agreed that tear gas was a lesser option than charging at crowds with batons or other forms of physical restraint.

BUT if dispersing the protesting crowd was its purpose, the tear gas appears to have failed to do its job as the protestors regrouped soon afterwards.

Some said the action actually created the opposite effect by drawing more people out on the streets. Crowds did subsequently appear in other busy commercial districts – Mong Kok, Causeway Bay and Tsim Sha Tsui.

Interviewed by the US news channel CNN on the streets, a local professor said the police action was “heavy-handed” and “extreme” and brought the people together.

UK experts have different views. One thought the police should have either used none, or a lot. But “what they did was pull the tiger by the tail”.

University of Sydney expert in policing and criminology Mark Findlay said the Hong Kong police were caught in a difficult situation.

He said, “On the one hand they want to appear like they are not heavy-handed, but on the other hand, they have to take a stronger-than-moderate approach because otherwise they will be looked at as weak.”

THERE were violent incidents in Mong Kok, with scuffles between protestors and those who wanted them to leave, resulting in injuries to some protestors, journalists and police officers.

Subsequently, the police were blamed for failing to protect Occupy Central participants. Some also accused the police of colluding with gangsters to disperse the crowds, or at least turning a blind eye to triad attacks.

These allegations were quickly and sternly rejected by top security officials. Secretary for Security Lai Tung-kwok said such criticisms were “unfounded” and “unfair” to police officers who have been handling the situation fairly, arresting 19 people, including some with triad background.

Critics have focused on the “delay” by police in intervening in the melee. But Lai countered that police response was hampered by protesters’ road blocks which made roads impassable.

Others questioned why tear gas or pepper spray was not deployed on the attackers while the police did not have problems using them at Admiralty? To this, the police explained that the situations at the two locations were different.

Have the police been impartial, or were these accusations justified? A fair conclusion to these questions can only be reached by examining all the facts objectively.

NO one will dispute that the police have a duty to maintain public order and safety of the city, and that the people’s freedom of expression must be respected.

The real thorny question is whether, and to what extent, society should or could accommodate protest actions that are causing severe disruptions and damages. A fair judgment of law enforcement actions in recent events cannot be made without that question being answered first.