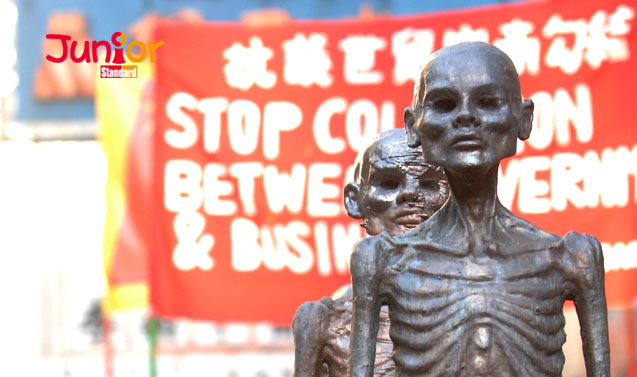 MOST Hong Kong people have enough food to eat, but sadly this is not the case in many parts of the world.

Sixteen countries have alarming levels of hunger, with Burundi (布隆迪) the worst affected, according to an annual index released on Monday which also reveals that 2 billion out of 7.1 billion people worldwide are affected by ‘hidden hunger’.

Hidden hunger, which is a lack of vitamins and minerals, weakens the immune system, stunts physical and intellectual growth, and can lead to death.

Burundi, which tops the Global Hunger Index (「全球飢餓指數」) for the third year in a row, is followed by Eritrea (厄立特里亞), East Timor (東帝汶 ) and Comoros (科摩羅 ).

Except East Timor which is in Asia (亞洲), the others are all African (非洲的) countries.

Some 805 million people around the world are still chronically undernourished, according to the report, despite progress in combating hunger. Three years ago, the index recorded 26 countries with ‘alarming’ or ‘extremely alarming’ hunger levels.

The report said hidden hunger not only leads to mortality of individuals, but also has economic impacts, including lost productivity, persistent poverty, and reduced gross domestic product in developing countries. The index is now in its ninth year.