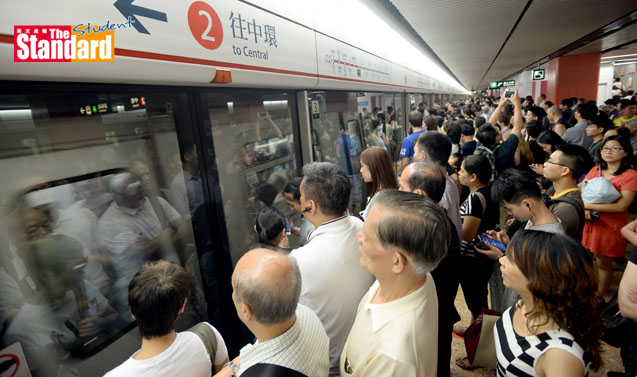 THE MTR (地鐵) and Star Ferry (天星小輪) have benefited from the widespread traffic chaos caused by the ongoing political turmoil, which has forced Hongkongers to abandon buses, taxis, trams and cars for their daily travel.

A spokeswoman for the MTR Corp said it had not consolidated exact passenger numbers for the period, but noted more people were using its service.

The MTRC said “an additional 300 to 400 staff have been deployed” to cope with the increase in passengers.

Protesters have blocked sections of roads in Admiralty (金鐘), Causeway Bay (銅鑼灣) and Mong Kok (旺角). Dozens of bus services have been suspended or have had their routes altered. Taxi drivers try to avoid going near the affected areas, for fear of customers complaining.

“Now I have to ride the MTR even for a short distance, say, from Wan Chai (灣仔) to Causeway Bay,” said a Hong Kong Island resident surnamed Lo. He would normally take the tram. “And that means a lot more walking.”

Even the iconic Star Ferry, mostly used by tourists yearning for a relaxing ride, is swarming with passengers who must now queue – a situation also found in MTR stations.

Due to route changes, buses now clog available roads during peak hours. This has a knock-on effect on other roads in the vicinity, affecting car owners.

“It took me 45 minutes to drive from Victoria Park to the Hong Kong Adventist Hospital (香港港安醫院) on Stubbs Road (司徒拔道) in Wong Nai Chung Gap (黃泥涌峽), when it’s supposed to be a five- to 10-minute drive,” said Ms Leung. “And that was before 8am, not even in the rush hour!”

Rather than drive, she said she would now only take the MTR.

“The MTRC is the biggest beneficiary,” said transport expert Hung Wing-tat (熊永達) of the Hong Kong Polytechnic University (香港理工大學). “It is able to handle increased ridership without any complaints.”