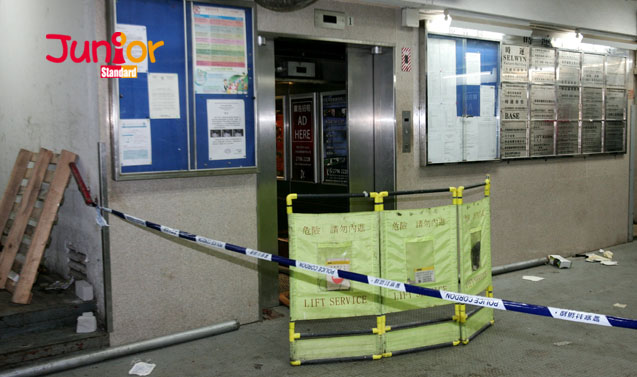 A LIFT fell to the ground from the 12th floor. Investigators from the Electrical and Mechanical Services Department (EMSD, 機電工程署) began working yesterday to discover what caused a lift in a Kwun Tong (觀塘) factory building to plummet 12 floors, injuring 29 people.

The lift, which was licensed to carry 21 people or a 1,600-kilogram load, descended the 12 storeys in 20 seconds at about 8.30pm last Wednesday. It remained intact.

Officers of the department have also asked a lift contractor to check all three lifts in the building. One is the passenger lift that failed while the other two are cargo lifts.

A worker in the Selwyn Factory Building (時運工業大廈) said the passenger lift was often out of order and people had to climb stairs to get to their offices and workplaces.

Police said 11 of the 29 people injured had been discharged from hospital by last Thursday while the other 18 were stable.

It received a warning letter in December after ‘wilful interference’ with lift operations.