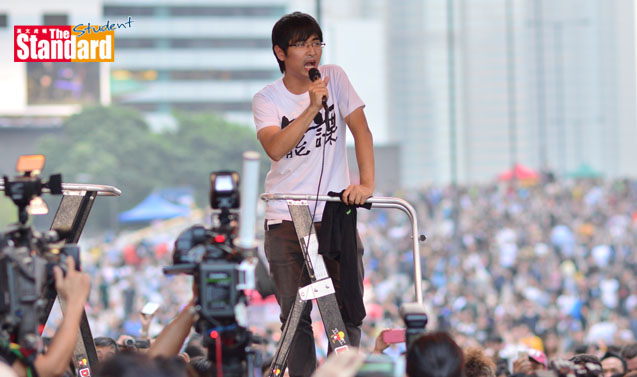 TALKS between the city’s No 2 official and Occupy Central (佔領中環) student leaders on political reform will be held on 10 October in Wan Chai (灣仔) and will be open to the media.

The agreement was reached on Tuesday night after the federation’s leaders held a third meeting with Undersecretary for Constitutional and Mainland Affairs (政制及內地事務局副局長) Lau Kong-wah (劉江華).

Each side will have no more than five members. Both sides will discuss two topics – the constitutional basis and the legal requirements of constitutional development.

“We may have two sessions to have the dialogue,” Lau said. “The venue will be in some place around Wan Chai and we will arrange it tomorrow with the students.” The venue should be neutral, indoors and where security is a major factor, a source said.

Lau hopes the meeting will be smooth and frank and that both sides will show mutual respect.

Federation deputy secretary-general Lester Shum (岑敖暉 ), who attended the talks with Lau on Wednesday night, said they felt disappointed and angered that the government still proposed the two agenda items, which he said showed it was not sincere in holding a dialogue with them.

But the students hope the government can positively react to their demands during the meeting.

“The Occupy Central movement was triggered after the SAR government submitted a very poor report [on the 2017 chief executive election reforms] to the central government,” Shum said.

“I hope that Carrie Lam can show courage to resolve the local political problem.”

Shum warned any forced clearance of the protesters would definitely affect the talks.

The federation said it will not end the protests unless there is a substantive breakthrough in the negotiations.