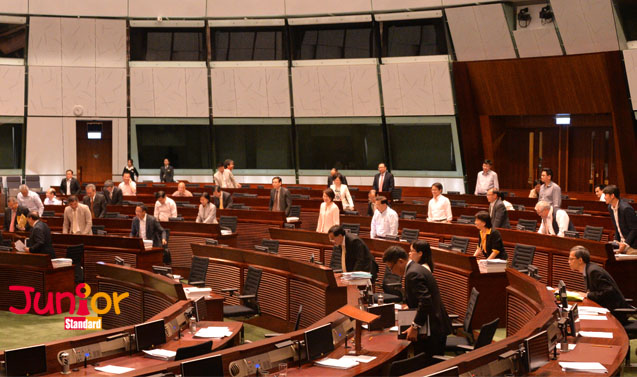 LEGISLATIVE Council (立法會) president Jasper Tsang Yok-sing (曾鈺成) has poured cold water on increasing calls for misbehaving lawmakers to be punished. He said such a move would be too controversial.

Federation of Trade Unions (工會聯合會) lawmaker Wong Kwok-hing (王國興) had proposed introducing a penalty mechanism. It included a wage cut and fine for lawmakers who throw objects at officials or disrupt meetings.

This call was backed yesterday by Executive Council (行政局) member Starry Lee Waiking (李慧琼). She is also a Democratic Alliance for the Betterment and Progress of Hong Kong (民主建港協進聯盟) lawmaker. She said it is necessary that house rules are amended to stem misconduct.

However, Tsang and another Exco member, Bernard Charnwut Chan (陳智思), doubted the effectiveness of such a move.

Tsang said actions by lawmakers are considered political acts. “It will be controversial to fine a lawmaker for a political act,” Tsang added. He also did not think that a penalty would deter lawmakers from disrupting meetings.