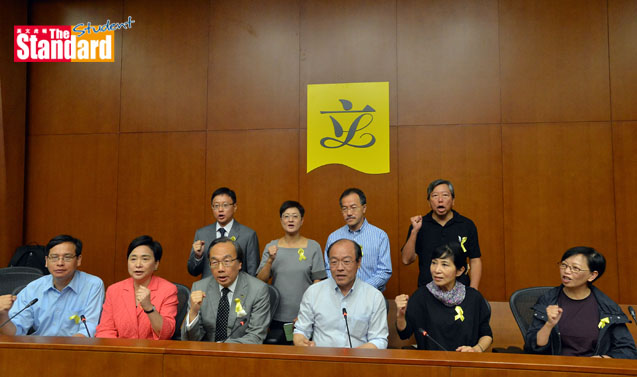 CHIEF Executive (行政長官) Leung Chun-ying (梁振英) has said pan-democrat lawmakers have “a case to answer” if they veto the political reform proposal in the legislature.

The chief executive election framework proposal made two weeks ago by the National People’s Congress Standing Committee (NPCSC, 全國人民代表大會常務委員會) limits the number of candidates to three, with each needing the backing of more than 50 percent of the 1,200-member nominating committee. The proposal needs the vote of two-thirds of the 70-member Legislative Council (立法會) and is expected to go ahead early next year.

“The [27] pan-democrats have said they will vote against this change. So, we are short of the two-thirds majority required under the Basic Law to get us universal suffrage,” Leung said in RTHK’s Letter to Hong Kong (香港家書) on Sunday.

“For universal suffrage in 2017, the NPCSC is ready, the SAR government and I are ready, Hong Kong people are ready. If the universal suffrage package is voted down by Legco members who control just over one-third of votes, they will have a case to answer.”

He asked why pan-democrats believe the present election method in which the chief executive is chosen by a 1,200-member Election Committee (選舉委員會) is more democratic than the universal suffrage election that is on offer.

“More important, why do they think rejecting that offer will get Hong Kong a better offer in five years?” Leung added.

He called on Hong Kong not to stand still and urged that, whatever the pace, constitutional reform should move forward. “Politics is the art of the possible,” Leung said. “Universal suffrage is now within reach.”

She earlier said now is the time for Hong Kong to reach consensus on universal suffrage. She also called on all parties to accept the proposed reform even if they did not propose it.

Legco president Jasper Tsang Yok-sing (曾鈺成) said there is a chance the proposal will pass through Legco.

Tsang said he is ready to resign as president and vote for the proposal if necessary.