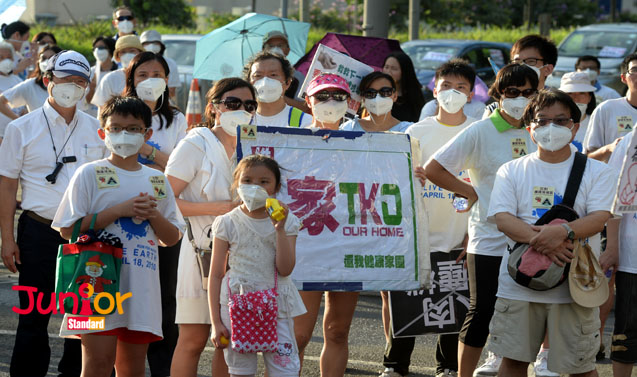 LANTAU (大嶼山) residents and environmentalists have vowed to keep fighting to protect the island’s beaches and rich ecosystems.

A Legislative Council (立法會) subcommittee endorsed HK$18.2 billion in funding to build a large incinerator on Shek Kwu Chau (石鼓洲). It was endorsed on Tuesday, 14 votes to six, by the 32-strong public works subcommittee.

The Finance Committee (財務委員會) will vote on 27 June on the Environment Bureau’s(環境局) proposal to expand the three landfills in Tseung Kwan O (將軍澳), Tuen Mun (屯門) and Ta Kwu Ling (打鼓嶺). It also wants to build a giant incinerator capable of handling 3,000 tonnes of waste a day. The waste will be reduced to 1,000 tonnes of toxic ash.

Just before noon, a 55-year-old expatriate woman, known as Jane, walked into the public gallery. She climbed over the edge, sat on the projector with her legs dangling and threatened to jump off. “Treacherous government,” she shouted. She was carried away for police questioning.

Later she told reporters, “I remember [Chief Executive Leung Chun-ying (梁振英)] at his pre-election saying very clearly there will be no incinerator at Shek Kwu Chau.”