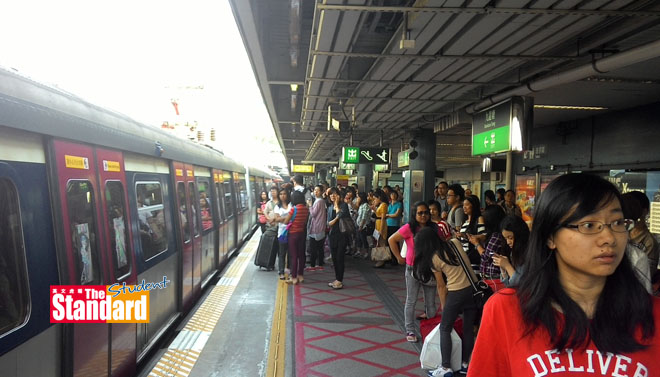 THE MTR (港鐵) has come under fire for not telling passengers quickly enough about a 35-minute suspension of East Rail (東鐵) services on Sunday, with lawmakers calling on the government to fine the corporation heavily.

But the company insisted it had complied with regulations to inform the Transport Department (運輸署) as soon as it became aware the service disruption would last for eight minutes or more and that announcements were made immediately in trains and stations.

The suspension of services, which stranded thousands of passengers, was due to a signal failure resulting in the MTR’s operations control centre “being blinded” about the whereabouts of its trains.
For the safety of passengers, the MTR said it shut down all services between Hung Hom (紅磡) and Lo Wu (羅湖)/Lok Ma Chau (落馬洲) stations on the East Rail link.

An MTR official said it had expected to be able to reboot the system in 10 minutes, but this failed.
Then it became aware the disruption would last 20 minutes or more.

At 8.10am, the control centre could not receive signals from the trains and could not pinpoint where each one was.

At 8.16am the MTR informed the Transport Department but did not tell the media until 8.27am. The problem was solved at 8.45am.

Initial investigation revealed the incident was caused by a faulty router in the data network transmission system.

There were further short disruptions to East Rail train services at 10.43am and 12.15pm when the control centre again did not receive signals.

Lawmakers accused the MTR of only informing citizens and the media about 20 minutes after the incident.

Bill Tang Ka-piu (鄧家彪), a member of the Legislative Council’s (立法會) transport panel, criticised the MTR for being too late in informing the public.

He said the government should consider increasing the penalty.

According to the penalty system, the MTR faces a HK$1 million fine for any service breakdown that lasts 31 minutes to an hour.

The last time service on the East Rail was suspended completely was in 2010 due to signal problems.

Talks of walkin...
THE government will test new m...