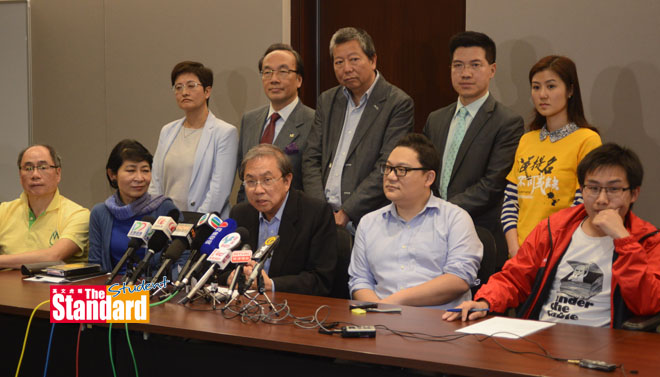 THE split within the pan-democratic camp has widened after the Occupy Central (佔領中環) movement decided to put forward three political blueprints, nominated by the public, to a referendum next month.

The proposals selected last Tuesday by Scholarism (學民思潮) and the Hong Kong Federation of Students (香港專上學生聯會), People Power (人民力量) and the Alliance for True Democracy (真普選聯盟) include public nomination.

The convener of the alliance, Joseph Cheng Yu-shek (鄭宇碩), said it would have been better if a wider selection of plans for the 2017 chief executive election had been put forward.

“The three plans are similar and do not give Hong Kong people any real choice in next month’s referendum,” he said.

Civic Party lawmaker Ronny Tong Ka-wah (湯家驊) said he was disappointed that his proposal was not selected. He also said he would not cast a vote in next month’s ballot.

“Occupy Central organisers selected the three proposals by screening; it means Hongkongers do not have much choice on 22 June,” he said.

Democratic Party lawmaker Sin Chung-kai (單仲偕) blamed the League of Social Democrats (社會民主連線) and People Power for not supporting the proposal by the alliance as they had promised.

“The Democratic Party (民主黨) might withdraw from the alliance if there is no proper explanation,” he said.

He warned that the student groups might take action on 1 July if the government puts forward a proposal that does not include civil nomination.

One of the initiators of Occupy Central, Chan Kin-man (陳健民), said radical factions had not hijacked the people’s choice. “Most participants are not affiliated to political parties, so I believe support for civil nomination will not split the pan-democratic camp.”

Another initiator, Benny Tai Yiu-ting (戴耀廷), said the public vote will proceed as planned next month, and those who support universal suffrage but do not support civil nomination can cast a blank vote.